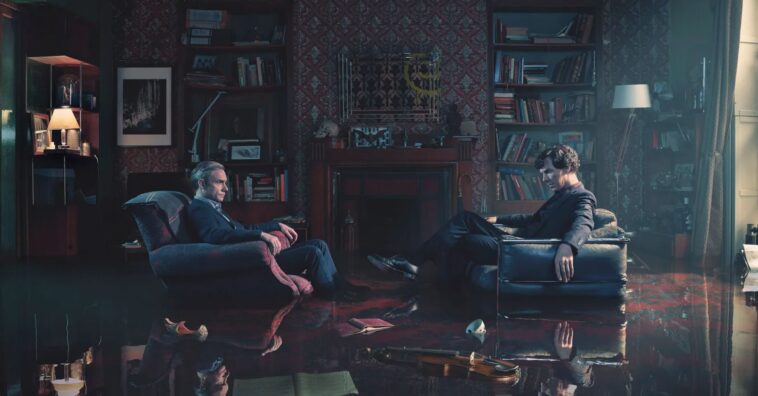 Sherlock is a British crime, mystery, comedy-drama television show broadcasted on BBC One between 2010 and 2017. The show consisted of 4 seasons and a total of 13 episodes. The show was completely based on the works of Sir Arthur Conan Doyle but with a new approach.

It also had a huge star cast; it starred Benedict Cumberbatch and Martin Freeman in the lead roles of Sherlock Holmes and Doctor John Watson, respectively, with co-starring performances by Rupert Graves and Una Stubbs, Louise Brealey, and Amanda Abbington, amongst others.

The show probably won’t be renewed for another season as so much time has passed since the last season, and if you are wondering if Sherlock (2010) is available on Netflix? Then the answer is NO.

How to Watch Sherlock(2010) online for Free| Is Sherlock on Netflix?

Benedict Cumberbatch’s Sherlock was streaming on Netflix, but now it has been removed. But here is an alternate to watch Sherlock online. Watch Sherlock on BBC iPlayer for Free. All you need is a VPN (if you are outside the UK) and a BBC account (which is free), and done.

Follow these steps to watch Sherlock online for free:

Where else can you watch Sherlock(2010)

Sherlock is a superhit British drama series that is streaming on a number of VOD services online. Some of them are listed below:

The Sherlock story is about modern age Sherlock Holmes. He is well known for his extraordinary logical reasoning, ability to take almost any form of physical evidence and master it, and use forensic science skills to solve difficult cases. John Watson is Holmes’ friend, roommate at 221B Baker Street, assistant, and biographer who narrates most of Conan Doyle’s Sherlock Holmes stories.

The series mainly focuses on the bond between Dr. Watson and Sherlock. Both men play their roles perfectly as they solve many crimes throughout the show’s episodes. This show is based in modern times, unlike other cases where there are no televisions or technology to help solve their puzzles. Sherlock became an instant success due to many factors; the show’s production design, storyline, and villains were top-notch.

The character development of Sherlock and other characters such as Dr. Watson, Jim Moriarty, and others were wonderfully done.

The show received a huge appreciation from not only fans but also from critics too. The show has an IMDb rating of 9.1 out of 10, achieved by a very small number of shows. It has a score of 78% on Rotten Tomatoes.

What else can you watch on BBC iPlayer for free?

BBC iPlayer offers free content only in the United Kingdom. If you are located outside the UK, then use ExpressVPN. Here is a list of British shows you should check out on iPlayer:

Here is your complete guide to watching Sherlock(2010) online. Unfortunately, Sherlock was on Netflix but was removed in 2021. The only viable option you have is to watch Sherlock online on BBC iPlayer from anywhere in the world.