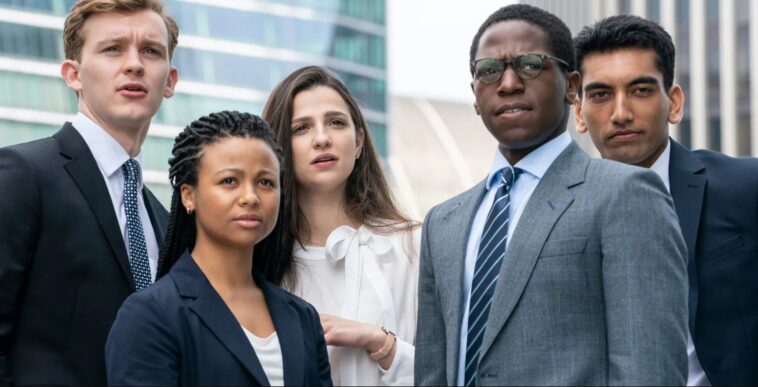 The industry is a British-American TV drama miniseries released on BBC Two in the UK and HBO in the USA on 9th November, 2020. The show is currently standing on a single season with eight episodes. Mickey Down and Konrad Kay created the show. The show starred Myha’la Herrold, Marisa Abela, Harry Lawtey, David Jonsson, and others in the main cast. The show’s second season is confirmed, but there is no official news on when it will be released.

Industry, is a British TV show about young graduates and the challenges they face in their professional life. The series is available on BBC iPlayer in the UK, if you are outside the UK, then follow these steps to watch Industry on BBC iPlayer from the US:

The show’s story is new, unique, and has not been covered before. The show follows the lives of young graduates competing against each other for an opening of a permanent position at an investment bank in London.

The graduates come from different backgrounds; one of them includes Harper Stern, an African-American girl from New York who is searching for a high-profile job in London and has applied for the position of an investment banker; however, she lied to the firm about her academic details.

Hari Dhar is another candidate for the job, the son of immigrants from India. Augustus, a Black British gay graduate of Oxford and Eton, is also an applicant. Robert Spearing, a white male residing in the working class of London who graduated from Oxford University, has also applied for the same position.

The last applicant is Lebanese, Yasmin Kara-Hanani, from a privileged and well-established background. The show progresses as they encounter each other several times while fighting for a limited number of openings.

The show has a unique approach; according to the ratings, the audience and the critics loved it. It has a rating of 6.9 out of 10 on IMDb and 76% on Rotten Tomatoes.

What else can you watch on BBC iPlayer from the US?

There is a ton of content you can stream with a VPN, some of which is listed below:

If you like watching British tv shows, then this one is for you. Watch Industry on BBC iPlayer from the United States or Canada for free with a VPN. We highly recommend ExpressVPN to watch BBC iPlayer in the US because we have tested it several times, and it worked.