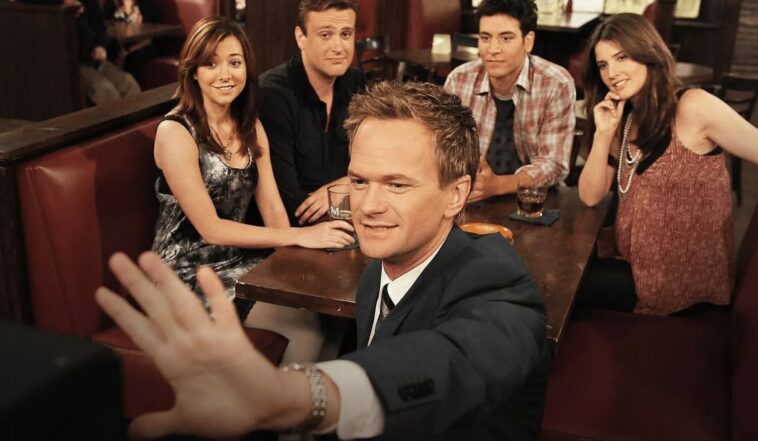 How I Met Your Mother is a beloved American sitcom that ran for nine seasons from 2005 to 2014. The show tells the story of Ted Mosby, a hopeless romantic and architecture professor, who recounts the events that led to him meeting his children’s mother to them in the year 2030.

One of the standout features of the show is its ensemble cast. Ted is surrounded by a group of close friends, including the womanizing Barney Stinson, the pessimistic Marshall Eriksen, the independent Lily Aldrin, and the aspiring journalist Robin Scherbatsky. Each character is well-written and distinct, and their interactions with one another drive much of the comedy and drama of the series.

Where To Watch How I Met Your Mother?

Where To Watch How I Met Your Mother in the United States?

How I Met Your Mother is streaming on Hulu and Amazon Prime in the US. You can get a Hulu account for $7.99/month or $79.99/year. The Amazon Prime membership pricing is listed below:

You can also watch How I Met Your Mothe by purchasing a digital copy of the series on Apple iTunes, Amazon Video, Google Play Movies, and Vudu.

How To Watch How I Met Your Mothe On Disney Plus From the US?

4- Now open disneyplus.com in your browser or app

How To Watch How I Met Your Mothe On Amazon Prime From Canada & UK?

Follow these steps to watch How I Meet Your Mother on Prime from Canada & UK:

4- Now open primevideo.com in your browser or app

How I Meet Your Mother Release Date

The first season of How I Meet Your Mother was released on September 19, 2005, on CBS. The sitcom ran for nine whooping seasons with 208 episodes and maintained a viewership of 11 million throughout its stint.

A spin series by the name of How I Met Your Father was released on Hulu in 2022, with its second season releasing on January 24, 2023.

Is How I Meet Your Mother on Netflix?

We saw a number of websites claiming How I Meet Your Mother streaming on Netflix, and all of them are wrong or have outdated blogs.

How I Meet Your Mother Trailer

What To Expect From How I Meet Your Mother

Another strength of the show is its clever use of storytelling techniques. The narrative structure jumps back and forth between the year 2030 and various points in the past as Ted recounts his life story to his children.

This allows for many clever flashbacks and flash-forwards and keeps the audience guessing how everything will ultimately come together. Additionally, the show uses a lot of running gags and recurring motifs that add to the sense of continuity and make the world of the show feel lived-in and real.

The show is not only a story about Ted’s romantic journey but also heartwarming about friendship and growing up. The group of friends always supports each other through the good and bad times. It was enjoyable to see the characters grow and evolve over the series, and their relationships with one another change and deepen.

The Humor In How I Met Your Mother

The humor in the show is clever and well-crafted, blending slapstick, witty banter, and clever pop-culture references. The show does not shy away from tackling serious topics such as death and career struggles, but it does so with a deft touch and a healthy dose of humor. This makes it a rare show that can make you laugh and cry in the same episode.

Who Is The Mother In “How I Met Your Mother”

One potential criticism of the show is that the titular “mother” character is not present for most of the series. Instead, the audience is slowly fed information about her through Ted’s flashbacks and stories. While this can be frustrating for some viewers, it also adds to the sense of anticipation and makes the payoff when she is finally introduced all the more satisfying.

Overall, How I Met Your Mother is a clever and heartfelt comedy that is well worth watching. The ensemble cast is top-notch, the storytelling is inventive and engaging, and the humor is both clever and heartfelt. It’s a show that will make you laugh, cry, and think and stay with you long after the credits roll.

The Cast Of How I Meet Your Mother

How I Meet Your Mother tells the story of a group of friends and how they deal with daily life affairs. The How I Meet Your Mother cast includes Josh Radnor as Ted Mosby, Jason Segel as Marshall Eriksen, Cobie Smulders as Robin Scherbatsky, Neil Patrick Harris as Barney Stinson, and Alyson Hannigan as Lily Aldrin.

We recently saw Josh Radnor in Hulu’s Fleishman Is in Trouble which was released in November 2022. He has also appeared in Law & Order and Grey’s Anatomy and played the tour guide role in Chris Even’s Not Another Teen Movie. Joining Radnor is Cobie Smulders, best known for her role in Avengers movies as Agent Maria Hill. She was also present in Spider-Man No Way Home and Captain America: The Winter Soldier.

Neil Patrick gained immense popularity through the role he played in How I Met Your Mother. He is best known for Gone Girl, The Matrix Resurrection, Harold & Kumar Escape from Guantanamo Bay, etc. He has also guest starred in Doctor Who, American Horror Story, and Ed. He has voiced multiple characters in anime series like Dragon Ball Z Abridged, Spider-Man, etc.

Joining the gang of friends in Alyson Hannigan, best known as Jim’s wife from American Pie movies. Hannigan gained popularity from the role of Willow Rosenberg in Buffy the Vampire Slayer.

How I Meet Your Mother Guest Stars

Here is the complete list of popular actors, singers, and tv personalities who appeared in How I Met Your Mother.

The list of guest stars appearing in HIMYM is long, and we can not mention everyone with the character they played. Here is a list of a few of them:

We would highly recommend How I Meet Your Mother to anyone looking for a great comedy series that’s well-written, emotionally resonating, and a great watch with friends and family. It’s a show that you can watch again and again and still find new things to enjoy.

All How I Meet Your Mother seasons are available on Disney Plus, Hulu, and Amazon Prime, and you can watch them right now with an ExpressVPN subscription.