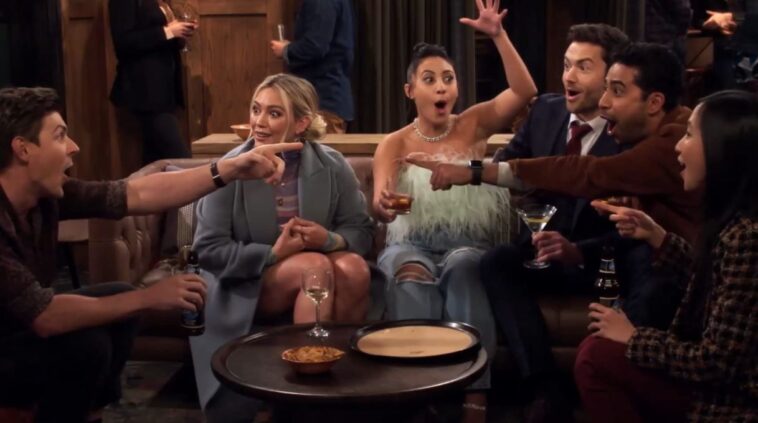 How I Met Your Father is an American sitcom that first premiered on 18th January 2022 and is a spinoff sequel to the famous sitcom How I Met Your Mother, aka HIMYM.

The show stars Hillary Duff as Sophie, a photographer who’s seeking the love of her life in the age of dating apps and potentially infinite options; Christopher Lowell as Jesse a part-time uber-driver who has his interests deep-rooted into music; Francia Raisa as Valentina, an assistant-stylist by profession and Sophie’s roommate who’s very close to her; Suraj Sharma as Sid, the bar-owner and Jesse’s best friend; Tom Ainsley as Charlie, Valentina’s boyfriend and Sophie and Valentina’s roommate; and Tien Tran as Ellen, the adoptive sister of Jesse who’s going through a divorce-patch and has now moved in with Sophie. The series also shows Kim Cattrall as the future version of Sophie who is actually narrating the story to his son, hence the title. If you are here to find out how you can watch How I Met Your Father on Hulu from Canada, Australia, or the UK, you are in the right place.

The plot like How I Met Your Mother is about friends the things they share together as pursuing their set goals in life, from rooms to gossip, to drinks, to happiness to sadness, and everything in-between. The story in the future is the older version of Sophie, telling her son about how she met his dad, while the present deals with a younger Sophie and her friends and how they approach their love life with so many options like apps available today.

Stop what you're doing because @HilaryDuff has an important message for all of you…#HIMYF is now streaming on @hulu! 🍾 pic.twitter.com/9ikbgyU2yD

If you are in the US you can stream How I met your Father on Hulu right now, all you need is an active Hulu subscription. But If you are residing in Canada, Australia, or anywhere outside the US, you will not be able to access Hulu. This is because Hulu is restricted to the United States only and all the Hulu Originals are unavailable for streaming outside the US.

But don’t worry, The Stream Bible has you covered. Follow these simple steps to watch How I Met Your Father on Hulu in Canada and Australia.

Note: To stream How I Met Your Father on Hulu you need an active Hulu subscription which costs $6.99/month.

How to get a Hulu subscription in Canada, Australia or from Outside the US? | Without using an American Payment Method

Due to copyrights and distribution rights, the streaming giant with almost 43.8 million subscribers is restricted to the United States only, likewise for Canadian streamers they have Crave. But the good news is you can get a Hulu subscription in Canada or from any other country by following these simple steps:

Read more: How to watch Pam and Tommy on Hulu in Canada

After many fails and disappointments, Hulu eventually issued a 10-episode series order and the new series’ first two episodes finally premiered on January 18, 2022.

The show has aired two episodes so far, namely “Pilot” and “FOMO” with two more “The Fixer” and “Dirty Thirty” on the way that will be aired on 25th January and 1st February 2022 respectively.

1- How many episodes of HIMYF

There is a total of 10 episodes of How I Met Your Father on Hulu.

Yes, scenes and memories from the past will be recalled in this season. Plus guest stars from How I Met Your Mother will debut in How I Met Your Father.

3- Where can I watch How I Met Your Father?

How I Met Your Father is exclusively streaming on Hulu. You can assess Hulu from outside the US with a VPN.

How I Met Your Dad was planned as a pilot in 2014 but was shelved the same year. The idea was put on hold for years when in 2021 Hulu ordered a 10 episode series and renamed it, How I Met Your Father.

5- How I Met Your Father’s release date in the UK?

Officially there is no release date announced for the UK fans. But they can watch How I Met Your Father on Hulu with a VPN.

Read more: How to watch Rick and Morty Season 5 on Hulu from Canada

How I Met Your Father – Reviews & Ratings

Since the show has aired only in the week of this writing, it hasn’t won any awards yet. However, it does seem a little unlikely as well since it has been assigned mixed to negative reviews by critics with the Rotten Tomatoes score being 32% so far and Metacritic giving it just a 49%.

How I Met Your Father – Trailer

How I Met Your Father – Cast

You should now be able to watch How I Met Your Father on Hulu in Canada, Australia, or the UK. All you need is an active Hulu account ($6.99/month) and a VPN account. Both of these services are offering a 30-day free trial.