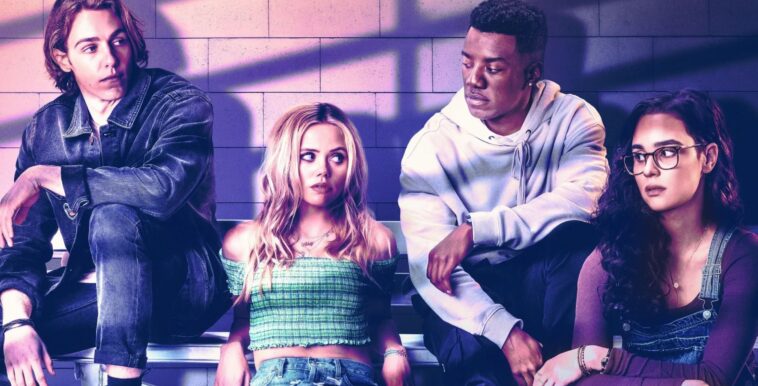 Based on a young adult mystery novel, One of Us Is Lying is a television series revolving around four high school students who become murder suspects after a classmate dies in front of them. It also doesn’t help when the entire school (and the local police department) finds out that the deceased had blackmail-worthy material on the four teenagers, which he was soon planning to release on his Gossip Girl-inspired webpage, About That.

Created for television by Erica Saleh, One of Us Is Lying debuted on Peacock on October 7, 2021. The series received mostly positive reviews and was soon renewed for a second season, which is heading to the streaming platform on October 20, 2022. It stars Annalisa Cochrane, Chibuikem Uche, Marianly Tejada, and Cooper van Grootel in the lead roles. If you are wondering where to watch One of Us Is Lying in Canada, you have landed on the right page.

Where to watch One of Us Is Lying Season 2 in Canada?

The second season of One of Us Is Lying is heading to Peacock TV in the United States. If you are based in the US, then get a Peacock subscription for $5/month and enjoy watching the show along with Halloween Ends, Love Island USA, and others.

Unfortunately, Peacock is not accessible in Canada due to copyrights. But the streaming service can be accessed with a workable VPN. We recommend ExpressVPN to change your IP address and watch One of Us Is Lying season 2 from Canada.

One of Us Is Lying Season 2- Trailer

The trailer of One of Us Is Lying season 2  dropped on Peacock’s official YouTube channel and gained 138K views in a few days.

One of Us Is Lying Season 2- Plot & Synopsis

After the Bayview Four – Addy Prentiss, Cooper Clay, Bronwyn Rojas, and Nate Macauley – figure out that Jake had dared Simon to play a deadly prank and then stolen the EpiPens that could have saved his life, they begin to accumulate evidence. However, the Halloween party at Jake’s house goes terribly wrong and ends with him being shot in the abdomen. Although the four students decide to hide the truth and never speak of it again, it looks like someone may already be aware of their dirty little secret.

Season 2 of the television show will pick up right after the cliffhanger finale of season 1, which showed an unknown person with the user ID Simon Says sending the Murder Club a message threatening to reveal what they did to Jake – unless the students follow their orders. The mysterious entity will apparently ask the group to break some laws, risk their lives, and even stab each other in the back.

How Far Will They Go to Protect Themselves?

The main question of the season is how far the teenagers go to save themselves and each other. Although they ended up becoming unlikely allies and confidants after a rollercoaster of a year involving murder, stalking, larceny, and more during season 1, will their newfound friendship survive the trials and tribulations of season 2?

One of Us Is Lying Season 2- Release Date

The second season of this murder mystery is set to release on October 20, 2022, on Peacock TV in the US. If you are located in Canada, get ExpressVPN to unblock Peacock and watch it.

The first season of One of Us Is Lying managed to gain 6.8/10 ratings on IMDb, and the popularity score of the second season is going up.

One of Us Is Lying Season 2- Cast

Here is the list of actors you will see in One of Us Is Lying season 2:

Peacock has emerged as one of the leading streaming services in the US. Here are some tv shows and movies you should watch on Peacock:

If you enjoy murder mysteries or are a fan of high school dramas with a splash of romance and many secrets, you should watch One of Us Is Lying Season 2 on Peacock from Canada with ExpressVPN.

We have tested ExpressVPN to unblock Peacock, Paramount Plus, HBO Max, etc and It worked perfectly. Therefore it is highly advised to get an ExpressVPN subscription for $6.67/m and enjoy the geo-restricted content online.