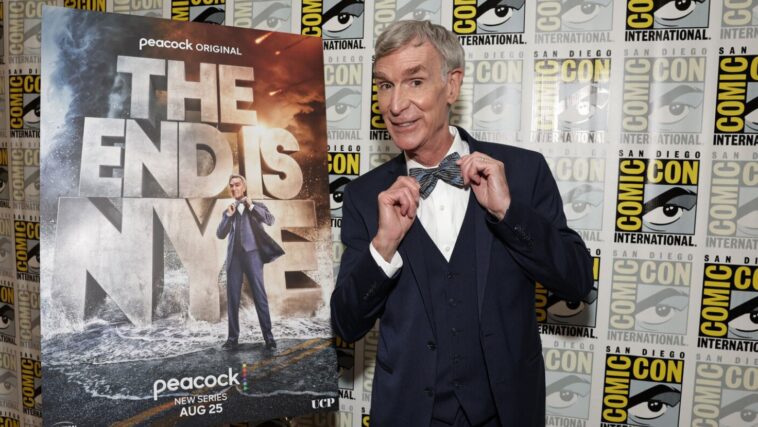 Bill Nye, the creator and host of the popular Emmy Award-winning show Bill Nye the Science Guy is heading back to your television screens with his latest documentary series. With hopes that humans can save the planet with science, the renowned educationist will explore the biggest global disasters in his upcoming show: The End is Nye.

The docuseries is written and created by Bill Nye, Brannon Braga, and Seth MacFarlane. In addition, Erica Huggins has served as its executive producer. Each episode of The End is Nye will show Bill Nye demystifying an epic disaster, both natural and man-made, explaining what humans can do to protect the earth.

This six-part series is set to arrive on Peacock on August 25, 2022, and if you are wondering how to watch Bill Nye in Canada, read on.

The End is Nye is an upcoming docuseries that will premiere on Peacock TV in the United States. If you reside in Canada and wondering how to watch The End is Nye from Canada, then all you need to do is follow these steps:

How to get a Peacock TV account from Canada

Peacock TV is unavailable in Canada, but this can not hold you back from watching The End is Nye in Canada. Follow these steps to get a Peacock TV account from Canada:

The End is Nye- Trailer

The official YouTube channel of Peacock released the trailer of The End is Nye on July 24, 2022. The clip provides viewers with a glimpse of Bill Nye taking on thrilling, instructive, and occasionally downright horrifying missions to portray the dangers faced by the planet.

The End is Nye- Plot

The End Is Nye will showcase Bill Nye experiencing six of the most epic catastrophes imaginable. The apocalyptic episodes will also show the acclaimed scientist explaining these calamities through science and demonstrating how humans may endure, lessen, and even avoid them.

Each independent episode is set to delve deeply into the mystery and dread of a single danger. Every disaster will provide thrills and hope for a way forward, as Bill Nye will present a scientific road map for surviving whatever comes our way. Although some may find The End is Nye rather horrifying, the main objective of the docuseries is to give people a boost of hope about the future along with a splash of scientific knowledge.

It is also pertinent to note that MacFarlane will have a short cameo in every episode of the up-and-coming series.

The End is Nye- Release and Reception

The End is Nye is yet to be released on Peacock. Hence, its ratings are presently unavailable. However, given the success of Bill Bye’s previous projects and the relevance of his documentary series, it is expected to be a hit. Moreover, the series, which has the potential to save the world, received a great response during its panel at San Diego Comic-Con 2022.

Here is a list of movies and TV shows you should check out on Peacock TV in 2022:

The End Is Nye is a documentary in which Bill Nye will imagine six of the most epic catastrophic events. The series is divided into six episodes and will premier on Peacock TV on August 25, 2022. If you reside in Canada, then get ExpressVPN and watch The End Is Nye from Canada on Peacock TV.

We have tested ExpressVPN to watch Peacock TV, HBO Max, and several other streaming channels, and it worked flawlessly. Therefore we highly recommend you to get ExpressVPN and watch all your favorite movies and TV shows.