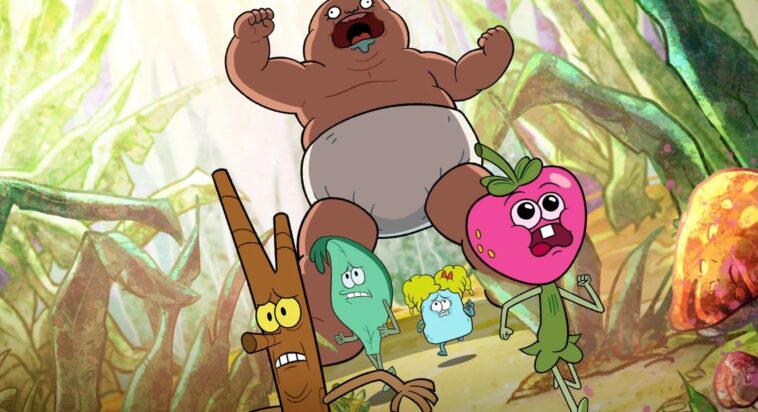 Get ready to immerse yourself in the comical adventures of tiny backyard creatures as The Mighty Ones returns to Hulu with its fourth and final season. The animated television series revolves around four unruly friends – a twig, a pebble, a strawberry, and a leaf – living in the ill-maintained backyard of a rock band.

Created by Sunil Hall and Lynne Naylor, the fantasy comedy premiered on November 9, 2020, and became an instant hit. The DreamWorks Animation Television production was swiftly renewed three more times, with its latest season arriving on Hulu on December 9, 2022. It features the vocal talents of Josh Brener, Jessica McKenna, Alex Cazares, and Jimmy Tatro. Here is everything we know about The Mighty Ones Season 4.

If you are here to find out where to watch The Mighty Ones Season 4 in Canada, read this guide to the last.

The Mighty Ones Season 4- Release Date

The fourth season of The Mighty Ones is heading to Hulu in the United States and it will release on December 9, 2022. Get an ExpressVPN subscription if you wish to watch it from Canada on Hulu.

The Mighty Ones Season 4- Trailer

The Mighty Ones Season 4- Plot

Residing in a disheveled backyard belonging to three equally disheveled human beings, The Mighty Ones is a self-named group of friends comprising a Twig, Rocksy, Leaf, and Very Berry – four hilarious creatures who are always going on adventures of their own and getting into trouble. Despite their tiny size, the four pals have larger-than-life personalities, which are reflected in their daring exploits and love for each other.

Discovering New Parts of the Backyard

When a great displaces this ragtag group of friends, the Mighty Ones have little choice but to explore the previously unseen areas of the backyard they call their home. Living as pirates, the members of the gang search for dry land while meeting odd new creatures that may or may not be their friends. However, regardless of their difficulties, the Mighty Ones are loyal to each other to the very end.

While Rocksy tries to get a makeover and Leaf looks for a pair of pants that might fit him, Twig ends up in a compost bin and is subjected to participate in a gladiator-style fight that could swiftly get out of hand. On the other hand, the new friend made by Very Berry could be planning to eat her and the rest of the crew. The Mighty Ones will also try to explore space before getting stuck in what they presume to be heaven but, in reality, is a light bulb.

What else can you watch on Hulu

Hulu is the number one source of entertainment in the United States. Here is a list of movies and tv shows you can stream on Hulu:

The Mighty Ones has received generally positive reviews since its premiere. The animated series is known for its witty dialogues and incredible voice acting, making it one of the most popular shows on Hulu. So, don’t forget to catch its final season on the streaming platform this December.

If you are still wondering where to watch The Mighty Ones in Canada, then Hulu is your streaming stop. We have tested ExpressVPN to watch Hulu in Mexico, Canada, and several other countries and it worked perfectly. Therefore we highly recommend ExpressVPN to all our readers.