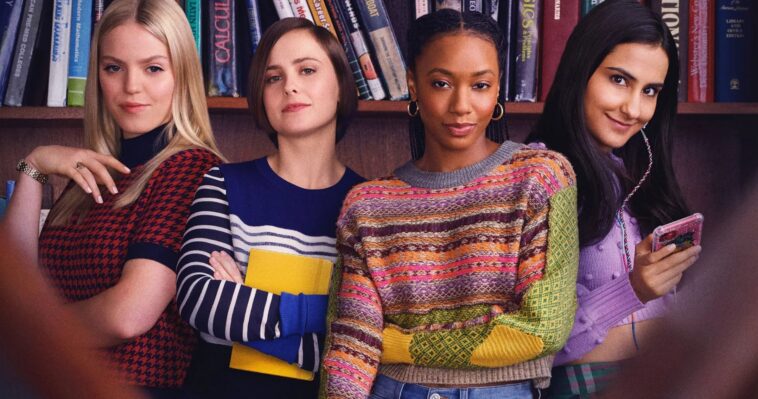 Do you think you had a wild college life? Well, you may be mistaken! Get ready for a new semester at Essex College as The Sex Lives of College Girls returns with a sizzling second season. The teen drama revolves around four 18-year-old roommates at a liberal arts college in Vermont as they struggle to navigate the uncharted territory of adulthood while maintaining a sexually active lifestyle.

Co-created by Mindy Kaling and Justin Noble, the series debuted on HBO Max on November 18, 2021, and was shortly renewed. Season 2 of the heartfelt sex comedy is heading to the streaming platform on November 17, 2022. Here is everything we know about the upcoming season of The Sex Lives of College Girls and how to watch it in Canada.

Where to watch The Sex Lives Of College Girls Season 2 in Canada?

The first season of this series is streaming on Crave and ILLICO in Canada.

How to watch The Sex Lives Of College Girls Season 2 in Canada?

Since HBO Max is not accessible from Canada, you will need a workable VPN to access it. Get ExpressVPN and watch The Sex Lives Of College Girls season 2 from Canada. Follow these steps:

The second season of The Sex Lives Of College Girls is set to premiere on HBO Max in the United States. The first season of this series is streaming on ITV in the United Kingdom, you can watch it for free. You will just need to create your account on ITV.com.

In Australia, season one of The Sex Lives Of College Girls is availabe on Binge and Foxtel Now.

The trailer for The Sex Lives Of College Girls seasons 2 just got released on HBO Max’s official YouTube channel. It has received more than five million views in a short span of 12 days, making it one of the most anticipated shows on HBO Max.

The Sex Lives of College Girls season 1 finale showed our favorite freshmen facing their demons in their own personal ways. While Kimberly gets her scholarship revoked after stealing tests from Theta, Bela decides to bid adieu to The Catullan and establish a comedy club with the former members of the exclusive group.

Meanwhile, Leighton breaks up with her girlfriend and tells Kimberly about her sexuality. Elsewhere, Whitney comes clean to her mom about her past affair with Coach Dalton.

For this quartet of friends, the hardships are far from over. As the girls try to overcome their respective traumas and insecurities, they may face even more difficulties as the new semester takes off at college. However, they are there for each other through thick and thin. Meanwhile, Kimberly’s romantic life may hit the snooze button as she tries to stay in Essex, while Bela may have a hard time establishing a comedy club.

Another Season of Fun and Raunchiness

Despite facing a few adversities, the four roommates are going to continue their journey of self-discovery while enjoying the peak of their teenage years. From crazy parties and awkward meetings to silly fights and side-splitting laughter, the second season of The Sex Lives of College Girls will be just as entertaining and memorable as its predecessor.

The Sex Lives Of College Girls season 2 is one of the most anticipated shows of 2022. The series has a positive rating of 7.8/10 on IMDb (16K voters) and a positive score of 72 out of 100 on Metacritic. The highest-rated episode was the season 1 finale scoring 8.2/10 on IMDb. Let’s see what the upcoming season has to offer.

What else can you watch on HBO Max?

HBO is one of the best content-producing studios in the United States. Here are some movies and tv shows you should check out:

Consisting of 10 episodes, season 2 of The Sex Lives of College Girls is bound to become a hit. If you enjoy Gen-Z comedies with a splash of adult humor, you should add it to your to-watch list this November. It is a perfect blend of how immature we all our in our college lives. Watch The Sex Lives Of College Girls season 2 in Canada on HBO Max with ExpressVPN.

We have tested ExpressVPN to unblock HBO Max, BBC, Peacock, etc, and it worked perfectly. Therefore we highly recommend it to all our readers and subscribers.