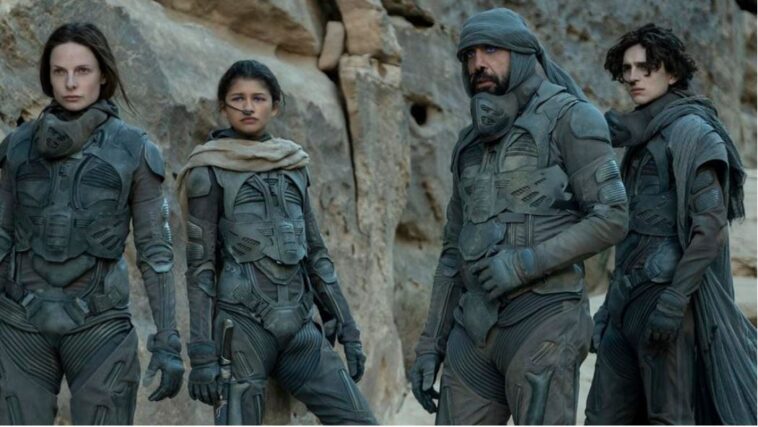 Dune is a 2021 movie, originally titled Dune: Part One. The movie is based on the 1965 novel by Frank Herbert. Since it was titled Part One onscreen, the movie was based on the first half of the novel. But overall, this was the third movie adaptation and the latest after David Lynch’s Dune from the 80s. Read on to watch Dune on Netflix.

Dune the movie stars Timothee Chalamet, Rebecca Ferguson, Oscar Isaac, John Brolin, Stellan Skarsgard, Dave Bautista, Stephen McKinley Henderson, and Zendaya among others. The movie is set in the future and follows the story of Paul Atreides – a young but rather gifted man who has been thrust into the most dangerous planet in the universe, Arrakis, to ironically ensure a future for his family and people. However, the planet continues to be torn apart among malevolent forces, thanks to a precious resource it houses and only those who dare overcome their fears can hope of surviving.

Dune was streaming on HBO Max for 31 days from 21st October 2021 to 21st November 2021. It has vanished from HBO Max but will likely return after its home release. If you missed watching Dune on HBO Max, get a subscription now just for $14.99 a month. The other HBO plan won’t stream the movie. Hulu subscribers can get a 7-day free trial for HBO Max.

If you are outside the US and want to watch Dune on HBO Max then follow these steps:

The new part of Dune is not available to stream on Netflix, However, the 1980’s version is watchable. Since Dune 2021 is the property of Warner Bros like The Matrix resurrection and others, it is not on Netflix at the moment.

But we can expect dune on Netflix after its home release on 11th January 2022, nothing is certain yet. But with its hype and streaming figures, we can say it will return on HBO max and Netflix both.

How to watch Dune in Australia

Dune is not streaming in Australia on any VOD service. You have to get a VPN and watch Dune on Virgin TV Go. You can also get it on rent from Prime Video but you will need a VPN.

Based on the novel Dune, the movie is available to rent on the following platforms

What Else Can I Watch on HBO Max from Outside the United States?

The golden disc we all are waiting for will be released this year. Dune Blue-ray 4K disc will be available in the US on 11th January 2022 both in UHD and plain HD version.

All the Warner Bros theatrical releases come to HBO Max in 4K Ultra HD, this includes Dune and upcoming WB 2022 movies like The Batman, Black Adam, Fantastic Beasts: The Secrets of Dumbledore.

How to Stream Dune on Netflix | Dune 1984 Netflix

The first adaptation of the novel Dune is available to stream on Netflix but in a limited number of countries. Here is how you can watch Dune on Netflix for the US or UK

The movie was originally planned for a 2020 release but its release was delayed due to COVID-19. It was then officially released on 15th September 2021. The movie was produced with a budget of USD 165 Million and has since been able to garner USD 394.5 million with the revenue from the US and Canada being 106.2 million and the remainder being from the rest of the world.

In addition to being rated favorably, the movie has also been nominated for quite a few awards and has even won more than half a dozen different awards until now. Some of the awards include:

The burning question from all the Dune fans out there is will there be a part two for Dune? The answer is YES, Dune will have a second part which is set to release on October 2023.

“I just received news from Legendary that we are officially moving forward with Dune: Part Two, It was a dream of mine to adapt Frank Herbert’s Dune and I have the fans, the cast, and crew, Legendary and Warner Bros. to thank for supporting this dream. This is only the beginning.”

Now you are fully equipped to watch Dune on Netflix and on HBO in the future. If streaming is not your thing and you want to plan the movie with someone rent it on Prime Video.