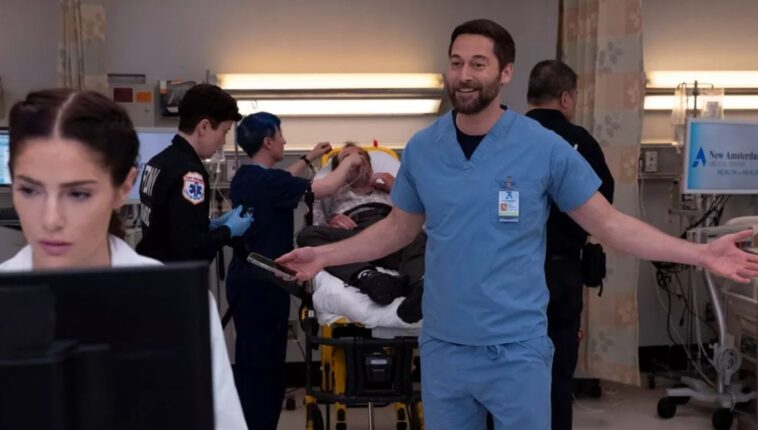 Based on a book titled “Twelve Patients: Life and Death at Bellevue Hospital” by author Eric Manheimer, New Amsterdam is a medical drama revolving around a doctor on a mission to transform and improve one of the oldest public hospitals in the United States.

Created by David Schulner, the show premiered on September 25, 2018, and has since been renewed four times. Its fifth and final season, which started airing on September 20, 2022, is returning from the winter break with a slate of brand-new episodes on January 3, 2023. The series features 90210 and Blacklist alum Ryan Eggold in the main role of Dr. Maximus “Max” Goodwin. Here is everything we know about New Amsterdam Season 5 and how to watch it from Canada.

Where To Watch New Amsterdam Season 5 In Canada?

The fifth season of New Amsterdam is heading to Peacock TV in the United States. If you reside in the US, get a Peacock subscription for $4.99/m. If you are traveling abroad or live in Canada, get an ExpressVPN subscription and watch New Amsterdam Season 5 from Canada.

How To Watch New Amsterdam Season 5 From Canada

Peacock TV is not available in Canada, but you can still watch it with a workable VPN subscription. Get an ExpressVPN subscription to watch New Amsterdam Season 5 in Canada and enjoy the series. Follow these steps:

How To Get A Peacock TV Subscription From Canada

Peacock TV is spreading its wings, but the wings are yet to reach Canada, but that does not mean you can not stream New Amsterdam Season 5 in Canada on Peacock TV. Follow these steps to get a Peacock subscription from Canada:

What Is The Release Date For New Amsterdam Season 5

New episodes of New Amsterdam Season 5 are heading to Peacock in the United States and are set to premiere on January 3, 2023. The eleventh episode is titled “Falling” and will be streaming on Peacock and NBC in the US.

There is no word on the international release date of New Amsterdam Season 5, the best way to watch it is with an ExpressVPN subscription. You can also watch BFM Season 2, Quantum Leap, How I Caught My Killer, Fantasy Island, The Drop, and Happy Valley Season 3. etc. If you are into reality shows, here is a complete guide to watch Love Island UK 2023 in US.

What To Expect From New Amsterdam Season 5

The series follows the personal and professional life of Max Goodwin, the new director of the New Amsterdam hospital. While the drama also focuses on the trials and tribulations of others working at or visiting the medical facility, it primarily revolves around the protagonist’s struggles to reform the public hospital by fixing the corrupt system.

What Has Happened So Far?

With this being the final season of New Amsterdam, viewers can expect the main storyline to come to a conclusion – whether for the better or worst – and watch the characters grow in ways they haven’t before.

The first half of season 5 included ten episodes. It started with doctors Lauren Bloom, Iggy Frome, and Floyd Reynolds lending support to Max following the decision made by Dr. Helen Sharpe. It also showed Max trying out an innovative program at New Amsterdam that could help the hospital cut back some of its costs. However, as the season progressed, Floyd decided to pursue a travel nurse while Iggy got back together with his spouse. On the other hand, Max tries to take over as a substitute in the ICU.

The series finale for New Amsterdam is going to be a two-hour-long affair. Although the details about the finale are being kept under wraps, fans are hoping to see some of the main storylines being wrapped up successfully by the time the last episode rolls around. With many characters finding love or moving on from what could have never been, it is certainly going to be a tearful goodbye.

The entire cast will retune for the final series, according to NBC. This includes Rayan Eggold as Max Goodwin. Eggold is an American actor best known for Literally, Right Before Aaron, Fathers & Daughters, and The Blacklist.

He is joined by British actress Janet Montgomery as Lauren Bloom. Montgomery started her acting carrier in the British teen drama Skins and got famous in the role of Madeline in oscar winning movie Black Swan. She has also appeared in This Is US and The Ex-Wife.

We also have Tyler Labin from Rise of the Planet of the Apes. Labin was also a part of Escape Room movies and has appeared in The X-Files, and It’s Always Sunny in Philadelphia.

Freema Agyeman is doing the role of Helen Sharpe; fans will recognize her from Sense 8 and The Matrix Resurrection. She has also appeared in reality series like Survivors and tv shows like Doctor Who and Law & Order: UK.

Here is a list of episodes of New Amsterdam Season 5:

If you enjoy medical dramas with a splash of romance, workplace politics, and a team of underdogs, you will surely fall in love with the staff at New Amsterdam. Don’t miss the all-new episodes airing on NBC starting January 3, 2023.

The best way to watch new episodes of New Amsterdam Season 5 is on Peacock TV with an ExpressVPN subscription. We have tested ExpressVPN to watch Peacock TV from Canada, and it worked perfectly. Therefore we highly recommend it.