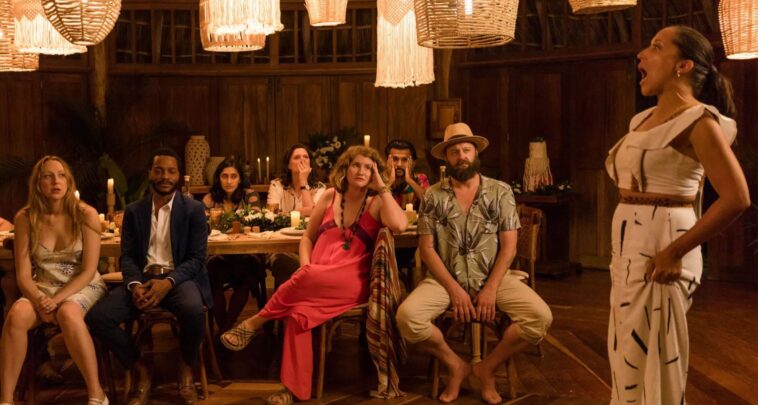 The Drop is an upcoming dark comedy revolving around a married couple whose exotic getaway turns into a nightmare after one of them accidentally drops their friend’s baby. Directed by Sarah Adina Smith and executive produced by Mark and Jay Duplass, the Hulu Original movie will premiere on the streaming platform on January 13, 2023.

The R-rated film, which many young couples and new parents might find a tad bit relatable, shows how quickly things can go from good to bad when your greatest insecurities bleed into your carefully constructed reality. Here is what we know about The Drop so far and how to watch it in Canada.

Where to watch The Drop in Canada?

The Drop is heading to Hulu in the US and if you reside in the US, get a Hulu account subscription for $7.99/m. Things are a little different in Canada because Hulu is not accessible here! But don’t worry; with an ExpressVPN subscription, you can easily access Hulu from Canada and watch The Drop.

How to Watch The Drop in Canada| On Hulu

The Drop is a romantic horror movie heading to Hulu in the United States. Since Hulu is only accessible in the US, you will need an ExpressVPN subscription to watch The Drop on Hulu from Canada. Follow these steps:

The Drop is an American movie set to release on Friday, January 13, 2022, exclusively in the United States. There is no word on the international release date of The Drop in the UK or Canada, and we can only anticipate the movie will land on Disney Plus.

January 2023 is full of content! Here are a few movies and tv shows you should check out this month, BFM Season 2, Koala Man, How I Caught My Killer, The Traitors, etc.

What To Expect From The Drop

Lex and Mani are relationship goals. They are young, in love, and run an artisanal bakery in Los Angeles. When one of their friends decides to get married on a tropical island, they decide to treat it as a romantic retreat where they could party, spend time with friends they haven’t seen in years, and enjoy scenic views.

Since the wedding dates overlap with Lex’s ovulation cycle, the married couple also sees it as an ideal opportunity to conceive. However, things go off the rails when one of them drops a baby in front of all their friends, thus ruining their perfect trip.

What was supposed to be an exciting reunion with friends turned into a horrible nightmare in minutes. The baby-dropping debacle instantly turns Lex and Mani into outcasts, subjecting them to instances of passive aggression and shocking accusations. The usually fun couple has to bear side glances and snappy remarks wherever they go on the island.

The Couple Questions Its Future Together

Although Lex and Mani had been thinking about starting a family for quite some time, the recent events may put a pin in their plans as old grievances begin to rear their ugly heads and their insecurities throw them for a loop. As things continue to spiral out of their control, the couple starts wondering about their future together.

The movie stars Anna Konkle as Lex and Jermaine Fowler as Mani, the two lovebirds who might find themselves at a crossroads after an unfortunate incident. Konkle has done several tv shows in her acting carrier, best known for her role in PEN 15 and Project Reality; the American actress has also appeared in Shameless and The Afterparty as a guest.

We have Jermaine Fowler in the lead role in The Drop, who is best known for Judas and the Black Messiah and Sorry to Bother You. Utkarsh Ambudkar is in the supporting role; he was previously included in Hulu’s The Dropout and Peacock’s Marry Me.

Gene Farber will also be seen in a supporting role. Farber is an established Russian actor best known for his performance in X-Men: First Class, Captain America: Civil War, The Rookie, etc.

What Else Can You Watch on Hulu?

Hulu is the number one source of entertainment in the US because It has something for everyone. You can watch several movies, tv series, and reality shows on Hulu, including Love Island UK and many more. Here is a list of trendy shows on Hulu:

If you are looking for a dark comedy that will make you wipe tears of laughter from your face, you should definitely check out The Drop, as it debuts on Hulu this January. You will surely not be disappointed!

Watch The Drop (2023) on Hulu from Canada with an ExpressVPN subscription. We have tested ExpressVPN to watch Hulu in Mexico, Canada, etc., and it worked perfectly. Therefore we highly recommend it.