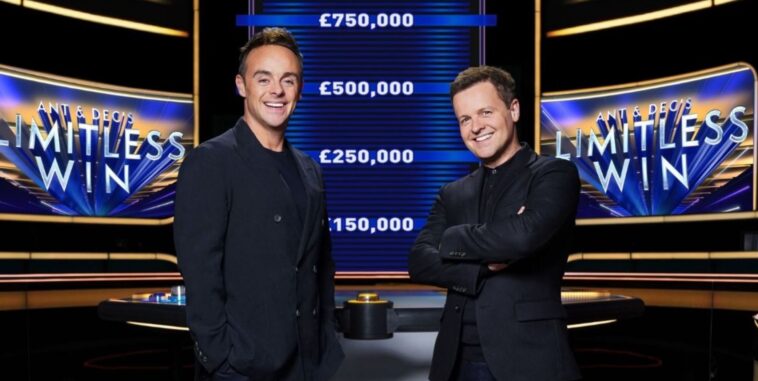 Hosted by Anthony McPartlin and Declan Donnelly, better known as Ant and Dec, Limitless Win is a British game show that allows competitors to earn unlimited money – but with a particular twist. Since there is no cap on the amount that participants can win, this show is arguably one of the most exciting contests to ever air on television.

Also called Ant & Dec’s Limitless Win, Hello Dolly and Mitre Studios produce the prime-time quiz show. It premiered on ITV on January 8, 2022. Moreover, this is the first time the duo has adopted a new format since launching Ant & Dec’s Saturday Night Takeaway in 2002. Hence, one can easily say this game show is unlike any other.

It is pertinent to mention that Ant & Dec’s Limitless Win consists of five episodes. However, ITV recently announced that it has already commissioned another season of the popular show. Ant and Dec’s Limitless Win is a game show that started in 2022 on ITV. The show includes a team of two players answering questions to win cash prizes. The show is free to watch on ITV in the UK but if you reside in Canada or USA, then follow these steps to watch it:

ExpressVPN is offering an amazing 3-month free special deal on the purchase of its annual subscription. You can watch Ant and Dec’s Limitless Win 2022 risk-free with ExpressVPN’s 30day money-back guarantee.

ExpressVPN work on almost every device. The VPN has dedicated Windows, Mac OS, Android, and Linux applications. You can also use ExpressVPN on gaming consoles like PS4 and Xbox. With a single subscription to ExpressVPN, you can simultaneously secure/stream five devices.

After connecting to a British server, you can now access ITV from the US, Canada, or anywhere outside the UK.

ITV released the first official trailer for Ant & Dec’s Limitless Win on December 09, 2021. The clip showed the comedic duo assisting participants in their quest to win an unlimited sum of money. It also featured the duo screaming together as their jaws fell after witnessing something completely shocking. You can also watch Love Island 2023 on ITV from the US for free.

Ant & Dec’s Limitless Win features a team of two players who must compete in the game to take home the cash prize. The team must respond to a series of questions within 60 seconds during the preliminary round, earning five lives for each accurate response.

Since every question has a corresponding number of responses, the contestants must submit guesses to numerical questions on the limitless ladder. They can do so by using a dial in the main game, attempting to get as close to the correct answer as possible without going over. Each accurate estimate moves the team up the ladder, marked with cash values every ten levels by the equivalent number of steps.

However, the participants lose the game if their team goes over, runs out of life, or fails to correctly answer a question within 60 seconds. One life is taken away for each number they are off from the correct response. Giving the exact response banks the monetary value the team achieves, allowing them to leave the game with that reward.

Since Ant and Dec host the show, viewers can expect a lot of witty remarks and hilarious commentary.

Ant & Dec’s Limitless Win has received positive responses from the audience, with an average viewership of 4.7 million. These stats make it the game show with the highest ITV rating in 2022. Meanwhile, on IMDb, the prime-time quiz game show has a rating of 6.7/10.

There are a number of things you can stream with a VPN on your side. You can watch game shows like Love Island season 8 on ITV or watch Interstellar on Netflix. Some of our favourite shows are listed below:

Ant and Dec’s Limitless Win is a reality TV show with unlimited winning options. Watch it on ITV for free from anywhere in the world with an ExpressVPn subscription. We have tested ExpressVPN to unblock ITV and BBC iPlayer from USA and Canada, and it worked flawlessly.