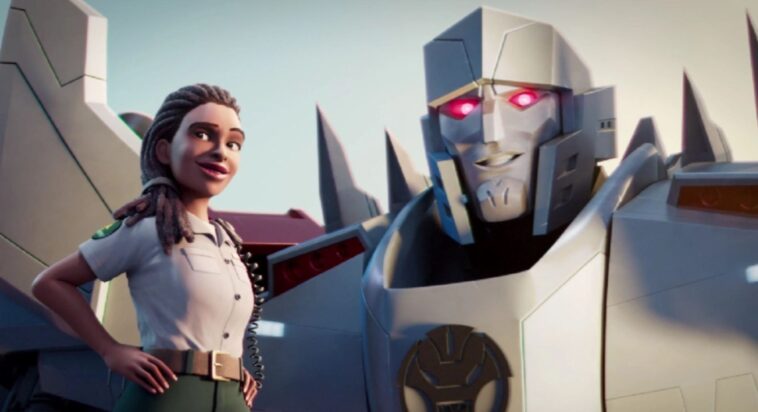 Based on the famous Transformers toy line, Transformers: EarthSpark is an upcoming animated series that focuses on two young children who move to a small town and get acquainted with a new generation of Cybertronian Autobots. Known as Terrans, these young Transformers bond with their new partners through their unique cyber sleeves.

Where to watch Transformers: EarthSpark in New Zealand?

The Transformer animated series is heading to Paramount in USA, Canada, and Australia. Since Paramount Plus is unavailable in New Zealand, you have to look for other streaming options. Neon is the only option New Zealanders have, but it has not announced streaming Transformers: EarthSpark.

How to watch Transformers: EarthSpark in New Zealand on Paramount

Transformers: EarthSpark’s trailer was released on Nickelodeon’s official YouTube channel and got 26000 views in a week.

The first season of this animated series is heading to Paramoujtn Plus and is set to release on November 11, 2022.

We can not say anything related to the success or failure of the series, but the popularity score on IMDb is going down to 4025 (negative).

Several years after the war between the Autobots and the Decepticons, Robby and Morgan Malto move to the town of Witwicky in Pennsylvania along with their family. As the two children struggle to fit in and get comfortable in their new home, they learn about the heroic machines and get bonded to two Terrans – a new kind of Transformers.

The 13-year-old Robby Malto is not a typical child. However, as he enters his teenage years and deals with the struggles of being a new kid in a small town, he also finds some unlikely friends who would take him on adventures, unlike anything he could have ever dreamed of. In addition, he bonds with Twitch, a Terran Transformer that can turn into a flying drone.

Meanwhile, 9-year-old Morgan Malto will also join her older brother on heroic missions after getting her own companion. She bonds with Thrash, a high-spirited yet brash Transformer who has the ability to become a motorcycle.

After the Malto kids accept Terran Transformers into their family, Bumblebee takes over the mentoring duties. Since he is known for his speed and agility, the well-known scout with the capability to turn into a Camaro will help the young Terrans learn how to safeguard the children while finding their place.

Megatron, the big bad leader of the Decepticons, appears to have turned to the good side following the civil war. Moreover, in Transformers: EarthSpark, he will fight alongside his long-time foe, Optimus Prime.

It consists of 26 episodes and features the voice talents of Sydney Mikayla, Zion Broadnax, Kathreen Khavari, Zeno Robinson, Danny Pudi, and Alan Tudyk, among others. Here is the complete list of the cast appearing in the new Transformers series so far.

What else can you watch on Paramount Plus from New Zealand?

Paramount is one of the best and oldest film studios in the United States. It gave us movies like The Godfather, Forest Gump, Transformers and recently Top Gun Maverick. Here is a list of movies and tv shows you should check out on Paramount Plus:

We have tested ExpressVPN with Paramount Plus, Peacock, HBO Max, etc, and it worked. Therefore we highly recommend it to all our readers and subscribers.