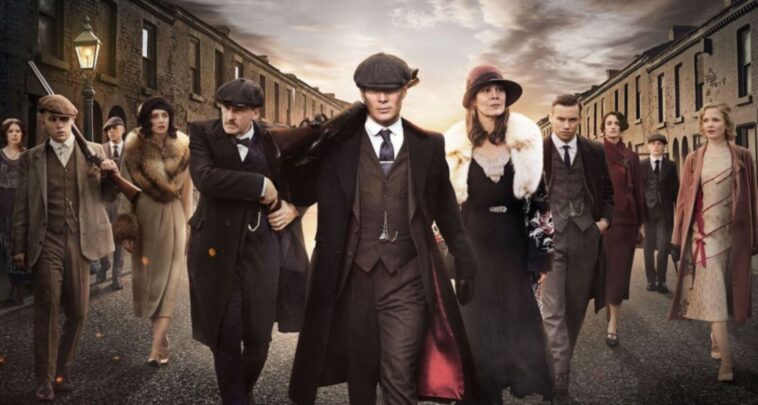 Peaky Blinders is a British period TV series. Steven Knight created this crime drama. This action show was first aired on September 12, 2013, on BBC Two until the fourth series, and then moved to BBC One for the fifth and upcoming sixth series. However, Peaky Blinders presents Cillian Murphy, Helen McCrory, and Paul Anderson, cast as Tommy Shelby, Elizabeth “Polly” Gray, and Arthur Shelby.

Peaky Blinders is a glorious assembled series based on a gangster family of Irish-Romani. This fictional group is based on a real urban youth gang. The same name gang was active in the city from the 1890s to the 1910s.

This TV series begins in Birmingham, England, a few months after the First World War in November 1918. Peaky Blinder is a gang that follows the ambitions of its boss Tommy Shelby.

Peaky Blinders season 06 has premiered on 27th February 2022 on BBC in the United Kingdom. But there is no news about the series landing on Netflix. As per our estimations, the sixth season of Peaky Blinders will be on Netflix in April 2022. (17th April – Not Official) Unfortunately, BBC iPlayer is not accessible in the United States or Canada. This is due to the copyrights that BBC holds for all its originally produced content online. The same goes for Hulu in the US and Crave in Canada.

Although you can watch the sixth season of Peaky Blinders in US on BBC iPlayer with a VPN. Just follow these steps:

Note: When you select Peaky Blinders on BBC iPlayer, it will ask you “Do you have a TV license?” just click on “Yes I have” and play the show. (BBC iPlayer does not verify). Here is the full guide to Watch Peaky Blinders Season 06 in US & Outside UK.

Season 06 won’t hit Netflix UK until November 2022, but the series will be on BBC iPlayer from the beginning.

We have created a complete guide on how you can watch Peaky Blinders season 06 in Canada through which Canadian fans can stream the show on the same date.

In Australia, you can watch the sixth season of Peaky Blinders on BBC iPlayer with a VPN. BBC does not require verification of residency, which means all you need is a VPN account to switch your IP address to a UK IP.

How to Catch Up on Peaky Blinders Series?

You can watch all the series of The Peaky Blinders on Netflix and BBC iPlayer. We have listed other OTT platforms where the show is available with all its episodes.

Peaky Blinders Season 06 Plot and Rumors – What to Expect?

The opening scene of the season 06 trailer tells us about the story, where Tommy Shelby comes in and starts firing rounds with his Tommy Gun. The series is about the storyline of Tommy and his redemption.

Show writer and creator Steven Knight has promised, there will be blood and fireworks.

After the death of actress Helen McCrory (in the Pandemic), her storyline is expected to end in a respectful manner

Tommy tries to kill himself with a revolver due to massive stress but fails as Arthur unloaded the gun. Polly got killed by Captain Swing of the publican army in vengeance for Tommy’s attempts to kill their leader, Oswald Moseley.

Later Polly’s body got burned along with her belongings. Her son (Michel Grey) decided to take revenge on Tommy for Polly’s murder.
Through this scene, the cast paid a tribute of remembrance to the actress Helen McCrory by maintaining 3 minutes of silence.

Four years later, Tommy visits New foundation French territory (Miquelon island ) on the last day of prohibition and meets Michael to talk about the whiskey business. Back in England, Arthur chooses to be high on opium and whiskey 24/7 and loses his mind due to murder events of (his wife) Linda and Aunt Polly.

Now in Miquelon, Tommy warns the police about Michels trade of opium to Boston and gets him trapped in prison by offering a business deal to Gina’s uncle, Jack Nelson who is the biggest and most powerful businessman in town.

On a call with his wife Lizzie Tommy, Tommy came to know about his daughter’s (Ruby Shelby) sickness related to folky gypsy stuff and decided to revert to England.

Tommy visits Michel the next day asking him to revive the powder business with him once he returns from jail.

How many Episodes of Peaky Blinders Season 06?

There are six episodes of Peaky Blinders season 06. The first episode is named “Black Day” and has premiered on BBC One and BBC Iplayer in the UK. The remaining episodes will be broadcasted every Sunday onward.

Will there be a Peaky Blinders Season 07?

The sixth season is the last. The story of the Peaky Blinders and Thomas Shelby will conclude in the season. However, the story will move forward in other forms.

In an interview with the Empire Magazine, the show writer Steven Knight confirmed the story will continue in the form of spin-offs or a movie.

The story will move forward to World War II and will not go beyond that on the big screen.

Peaky Blinders season 06 will be on Netflix by the end of April 2022.

There is no confirmed date of the Peaky Blinders season 06 release date on Netflix in the United Kingdom. We can expect this series to be on Netflix UK by the end of this year.

3- Will Peaky Blinders season 6 on Netflix US?

4- What other series of Peaky Blinders are on Netflix?

All the previous seasons are available on Netflix around the globe.

5- How many episodes of Peaky Blinders are there?

There are 30 episodes of Peaky Blinders streaming on Netflix and iPlayer.

6- How many series/seasons of Peaky Blinders are there?

There are five seasons/series in a total of the Peaky Blinders franchise. The sixth will premiere on 27th February 2022.

We don’t have confirmed intel on this news, as per our estimations Peaky Blinders season 06 release date on Netflix will be 17th or 24th April 2022.

8- Is Polly in season 6 of Peaky Blinders?

After the unfortunate death of Helen McCrory (from cancer), Chances are slim to see the character “Polly” in season 06 of Peaky Blinders. But the director has confirmed her appearance in Peaky Blinders season 06.

Unfortunately, that is correct. The Peaky Blinders new series will be the last.

11- What channel is the new Peaky Blinders on?

Peaky Blinders will be exclusively available on BBC One and iPlayer.

12- Where can I watch the new Peaky Blinders?

13- How many episodes are in season 06 of Peaky Blinders?

There are six episodes of Peaky Blinders season 06.

14- How many seasons of Peaky Blinders are on Netflix?

Five seasons of Peaky Blinders are on Netflix.

Yes, it is free. All you need is an active BBC account to watch it on BBC iPlayer.

Yes, they did and BBC has made a documentary over it.

17- Can I Watch BBC iPlayer in US and Canada?

BBC iPlayer is officially not available in the United States or anywhere else other than the United Kingdom. But with a VPN you can Watch iPlayer in USA with ease.

The gang grabs the attention of a detective chief inspector in the Royal Irish Constabulary named Major Chester Campbell. Winston Churchill sent Major Chester Campbell from Belfast. However, he had been sent to clear the city of the Irish Republican Army, common criminals and Communists gangs. Winston Churchill charged him for the uprising in Birmingham. He recovered hidden arms that were stolen before and meant to be shipped to Libya. On December 3, 1919, “Black Star Day,” the first season of Peaky Blinders, ended.

The second season has the Peaky Blinders dilates their criminal corporation in the South and North. However, the stronghold in Birmingham is still shown. The series shows the beginning of 1921 and ends by culminating at Epsom racecourse on May 31, 1922, Derby Day.

Peaky Blinders wraps the events of 1924 in the third season. The series continues by showing that Tommy entered the dangerous world internationally. The third series also features Father John Hughes, who is involved in an anti-communist organization. On Christmas Eve 1925, the fourth series began following the general strike of May 1926. Now Tommy was elected as a Member of Parliament in 1927, and he used Jessie Eden for information. In addition, the fifth series begins by showing two years later, on October 29, 1929, and ends on the morning of December 7, 1929, after fascist leader Oswald Mosley leads a rally.

Moreover, the fifth series aired on BBC One on August 25, 2019, and finished on September 22, 2019. Finally, under a deal with The Weinstein Company and Endemol, Netflix gained the rights to release the show in the United States and across the globe.

What is the Peaky Blinders Dance?

The most watched show of 2021 on Netflix (Peaky Blinders) is returning this month on BBC.

After the death of Helen McCrory, who played Aunt Polly the cast is limited to the following members

Peaky Blinders is arguably one of the best TV series. The series is worth watching if the viewers like crime, drama, and action. IMDb gives an 8.8/10 rating to this show, while Rotten Tomatoes rates it 92%.

Furthermore, the search volume tells that Peaky Blinders was the most popular show on Netflix in 2021.

Critics highly praised Cillian Murphy’s performance. Unfortunately, this masterpiece will end with the sixth season. BBC confirmed that the last season is releasing on Sunday, February 27 at 9 pm on BBC One.

The release date of Peaky Blinders season 06 on Netflix is in late April 2022, while it will stream on 27 February 2022 on BBC. Before you watch the sixth series of this franchise, refresh your memories by streaming Peaky Blinders on Netflix or BBC iPlayer.

The series is also streaming on Netflix in a number of regions, you can also purchase the British series on Apple iTunes, Amazon Videos, Microsoft Store, and from other stores.