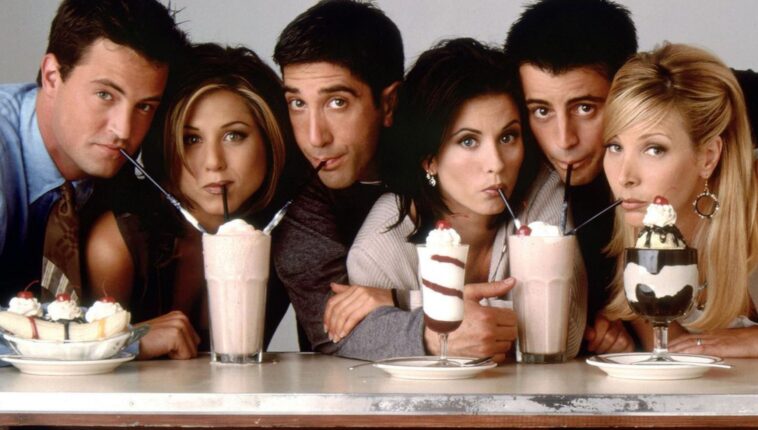 If you are into sitcoms, you must surely be familiar with the name Friends, the epitome of sitcoms that aired for a good ten seasons between September 22, 1994, and May 6, 2004. Today, we will be dealing with the issue of where to stream Friends on Netflix.

For those who will be going through their first run of the show, Friends tells the story of the everyday life of 6 friends from New York and the events that unfold in their lives, from jobs to love, to marriage, to kids, to fights, to divorce and everything in between.

Is Friends on Netflix?

The straight answer to this question is yes. Friends, the most popular sitcom from the nineties, is available on Netflix but in a limited number of regions.

Unfortunately, Friends was recently removed from the American Netflix library, but you can watch it by following these simple steps.

You can use ExpressVPN to watch FRIENDS on Netflix with no restrictions for an entire month.

Friends is available on Netflix only in the UK and Ireland. If you are in the United Kingdom, then all you need is an active Netflix subscription, and you are all set to watch Friends on Netflix.

But for some reason, if you are in the United States, Canada, or anywhere else where you can not find the famous TV show on Netflix, then follow these detailed steps to Stream all episodes of Friends on Netflix:

ExpressVPN offers an amazing three-month free special deal on the purchase of its annual subscription. You also have the ultimate opportunity to try ExpressVPN for thirty days for free, as it offers a 30day money-back guarantee on its every subscription plan, which makes this deal a Risk-Free deal.

After signing up, download the ExpressVPN application on your preferred device. ExpressVPN has dedicated apps for Windows, Linux, Android Systems and macOS. You can also use ExpressVPN on your gaming consoles like Xbox and PS4.

Secure and stream with up to five devices simultaneously with a single ExpressVPN subscription.

How to Watch Friends on Netflix from Canada

If you are from Canada, you won’t be able to find the title in your Netflix library. This is because Friends was removed from Netflix Canada and the only solution for you is to use ExpressVPN and watch Friends on Netflix from Canada.

Another option to watch Friends in Canada is on Crave. All ten seasons of Friends are available on Crave.

How to Stream Friends on Netflix from the United States

Since we have already mentioned how you can watch Friends from the United States on Netflix, here are some other options for you:

Get Friends on rent

The famous sitcom Friends is available for rent on the following platforms:

Filled with a nostalgic charm and countless iconic lines, Friends primarily revolves around a group of close-knit friends living in Manhattan. At the beginning of the series, all the main six characters – Rachel, Monica, Ross, Chandler, Phoebe, and Joey – struggle with their love lives and careers while supporting each other through their late 20s and 30s.

Over the ten seasons of the award-winning sitcom, the storyline explores the relationships between the group members and their families, lovers, colleagues, and acquaintances.  It also perfectly depicts what it feels like to prepare yourself for adulthood when you are already an adult. However, Friends also shows how having a support group can make it easier and much more fun to navigate through life.

The comedy series opens with a blonde-haired and fresh-faced Rachel Green abandoning her fiancé at the altar. Having no other close friends in Manhattan, she finds her high school best friend Monica Geller at a local coffeehouse called Central Park, which serves as the primary hang-out spot for the entire squad. Upon meeting her former friend, whom she hasn’t seen in several years, Rachel convinces Monica to let her move into her apartment as a roommate.

Throughout its run on television, Friends captures Rachel evolving from a rich girl dependent on her father’s money to a successful woman who starts her career from scratch after leaving her old life behind. She first begins as a waitress at Central Perk. Even though she is not particularly good at what she does, Rachel manages to keep her job at the café for several years as her lovesick manager, Gunther, refrains from firing her. Eventually, Rachel finds a better opportunity in a fashion company.

Meanwhile, Monica is an ambitious chef who is obsessed with cleanliness and can be highly competitive. She also has her own apartment and seems to have everything in her life under control – even though that is far from the truth. In reality, Monica struggles to have a healthy relationship with men and often displays signs of obsessive-compulsive behavior, which play a vital role in advancing many subplots throughout the series.

In addition, Monica also struggles with the traumatic memories of her teenage years, when she was mocked and belittled for struggling with obesity. She also has a tense relationship with her overbearing and over-critical mother, who prefers her son over her daughter.

The son in question is Ross Geller – a paleontologist with a streak of failed relationships, including a divorce. The pilot episode of Friends shows him feeling down over the prospect of his ex-wife, Carol Willick, leaving him for a woman. To make matters worse, Carol is also pregnant with his child, who they later name Ben. However, while Ross is in the depths of his despair, Rachel again enters his life, reminding him of his teenage crush on her.

In the later seasons, Ross is shown to be a good parent to Ben. On the flip side, he gets divorced thrice over the ten years depicted in Friends. He also works at the Museum of Prehistoric History and is often teased by his friends for being a nerd, which clashes with his somewhat inflated ego. Ross is also the favorite child of the Geller family. Nevertheless, his string of failed relationships frequently damages his self-esteem.

The fourth member of the squad is Chandler Bing. He met Ross in college, and the two soon became best friends. Though he is a highly sarcastic individual with a tendency to be passive-aggressive, Chandler is also the funniest and most relatable of the group. He works as a statistical analyst – something his friends have no idea about – at a big company and vehemently hates his job. However, since it pays well, he can live in the apartment opposite Monica’s.

Chandler lives with Joey Tribbiani, the fifth member of the crew. Joey is a struggling actor with great looks and a charming personality, which makes him rather popular among women. However, despite his attractive face, he has difficulty getting calls from the casting directors.  He is also depicted as someone with low intelligence, making ridiculous situations and plotlines. However, his good heart and aspirations make him an ideal underdog.

Joey is also the most sensitive of all of them, and even though he is not the best actor, the rest of the characters wholeheartedly support his endeavors. Initially, he has the strongest bond with Chandler. Though as the series progresses, Joey develops close relationships with the others.

Lastly, Phoebe Buffay is the quirkiest and most eccentric group member. Despite having the most tragic – and often unbelievable – backstory, Phoebe is shown to be a pacifist who believes in New Age ideas, can contact spirits, and believes in many superstitions. She is also a vegetarian and tree hugger who works as a masseuse. Moreover, she is a self-taught singer and fluent in Italian and French.

At some point before the series started, Phoebe and Monica were roommates. However, Phoebe moved out because of Monica’s attitude towards cleaning. In the later seasons, she acts as a surrogate for her brother and gives birth to triplets. Meanwhile, she has an identical twin sister named Ursula, the polar opposite of Phoebe, which means the two do not get along.

The series was well-received by the viewers, and it soon gained cult status. The show’s first season was rated 71% on Rotten Tomatoes and 59% on Metacritic. Things picked off in the second season, and Friends never looked back, ending the tenth season, AKA the final season, at a score of 83% on Rotten Tomatoes. The series also has an 8.8 out of 10 on IMDb.

Friends TV show is also one of the few sitcoms to have a massive number of viewers, with each episode premiering. The first season had more than an average of 31 million viewers, 31.3 million to be exact, while the views skyrocketed to 52.5 million by the time the finale “The Last One” was aired.

The show has six main characters around which the show is centered. These are Jennifer Aniston as Rachel Green, Courtney Cox as Monica Geller, Kisa Kudrow as Phoebe Buffay, Matt LeBlanc as Joey Tribbiani, Matthew Perry as Chandler Bing, and David Schwemmer as Ross Geller.

For your knowledge, Friends is streaming on Netflix but not in all the libraries; if you can’t find it in your Netflix library, read on to find out how you can watch it.

The all-time popular sitcom has also been nominated multiple times for various awards in various categories. The show has been nominated for more than 256 awards and has won on 65 occasions.

Some of the awards won include,

Frequently Asked Questions to watch Friends on Netflix and Online

1- Where to watch Friends on Netflix?

The most famous American sitcom of the nineties is available on Netflix and you can watch it from the United States and Canada. Get ExpressVPN’s subscription and watch Friends on Netflix from the US, Canada, or anywhere else.

2- How many seasons of Friends are there?

Friends has ten seasons, and all of them are available on Netflix. A Friends reunion was done in 2021. It was a night of memories, uncontrollable laughter, happy tears, and special guests to complete this once-in-a-lifetime evening.

3- How many episodes of Friends are on Netflix?

All ten seasons and 236 episodes of this tv series are available on Netflix.

The famous sitcom aired for a straight ten years. it started airing the first season on September 22, 1994, and the last episode of this series aired on May 6, 2004, named “The Last one.”

Most of the show was filmed at Warner Bros Studios, located in Burbank, California. People often believed it was somewhere in New York, but in reality, it was located in California.

The cast was moved out to a different location for a few episodes. The fourth season’s final episode was shot in London to capture the maximum popularity of Friends in the United Kingdom.

6- Who appeared as a guest in Friends?

Friends has a huge guest list of superstars appearing in different seasons. Here is a list of guests appearances in the tv series:

7- What else can you watch on Netflix?

There are tons of comedy and action-filled movies and tv shows on Netflix. Here is a list of few of them:

Therefore we highly recommend using ExpressVPN to watch your favorite movies and TV shows without geo-restrictions.