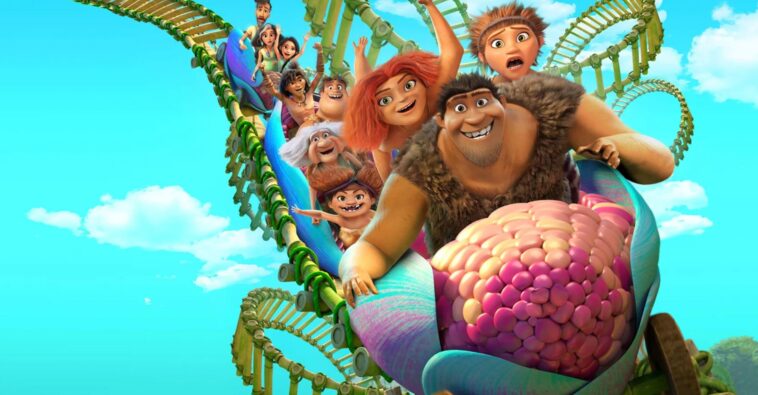 A sequel to the 2013 animated movie featuring an eccentric cave family, The Croods: Family Tree is a comedy adventure series produced by DreamWorks Animation Television. The animated series revolves around the Croods and Bettermans. It shows the two families striving to live together in a tree house following the events of The Croods.

Executive produced by Mark Banker and Todd Grimes, The Croods: Family Tree premiered on September 23, 2021. Owing to its popularity, the series was shortly renewed, with the second and third seasons airing on April 5, 2022, and June 2, 2022, respectively. Meanwhile, the fifth and final season of the animated comedy is heading to Hulu on November 23, 2022, and if you are wondering where to watch the final season of The Croods in Canada, then read on.

How to watch The Croods: Family Tree Season 5 on Hulu from Canada

The final season of this animated adventure series is set to premiere on Hulu in the United States. If you are currently living in Canada and want to watch The Croods season 4, then all you need to do is follow these steps:

The official YouTube channel of DreamWorks released the trailer of The Croods: Family Tree Season 5 on November 10, 2022. The clip shows the prehistoric cave family struggling with their new lifestyle while trying to get along with their hosts.

The Croods: Family Tree follows the narrative of the Croods and Bettermans as they find themselves living together on the idlest farm in prehistory. Since the series is set after the events of the movie, it shows the ancient family moving out of their predator-filled home to coexist with their more advanced and seemingly evolved enemies, the Bettermans, in a utopian garden.

Thus, the Croods are no longer engaged in a struggle for survival. However, they now have to deal with boredom. While Thunk settles into his new laid-back life with ease, the rest of the clan struggles to suppress their instincts to flee or fight. The tumultuous disruption of the Bettermans’ lovely way of life has not exactly made them happy either. In addition, the teenagers, Eep and Guy, are still in love and attempting to learn how to flirt without their families finding out.

The Croods: Family Tree has received mostly positive responses from the audiences. It currently has a rating of 6.8/10 on IMDb based on 2.5k reviews.

Here is a list of voice actors who are in the fifth season of Croods: Family Tree

Croods: Family Tree season 5 will consist of six episodes which are listed below with release dates:

What Else Can You Watch on Hulu from Canada?

There are tons of movies and TV shows you can watch on Hulu from Canada, some of them are listed below:

The Croods is the story of two families trying to live together in a tree house. This animated franchise’s fourth and final season is set to debut on Hulu on August 31, 2022, in the United States.

If you are in Canada, then get ExpressVPN and watch The Croods Season 5 on Hulu from Canada. We have tested ExpressVPN with Hulu, HBO Max, and several other VOD services, and it worked flawlessly. Therefore we highly recommend using ExpressVPN to cater to all your streaming needs.