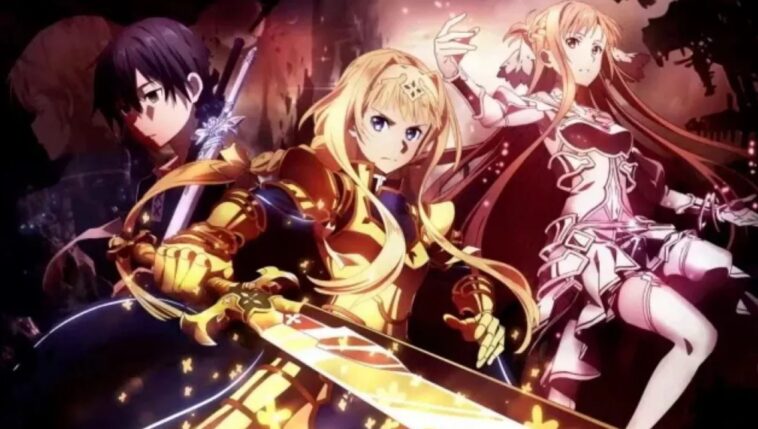 Sword Art Online Japanese anime series is based on the books written by Reki Kawahara and illustrated by Abec. At the Dengeki Bunko Autumn Festival 2011, an anime adaptation of Sword Art Online was announced with other Reki Kawahara’s light novel series. The anime is produced by Aniplex and Genco, animated by A-1 Pictures, and directed by Tomohiko Ito with music by Yuki Kajiura. This anime is adapted from the first four novels and parts of volume eight. If you are here to find out how you can watch Sword Art Online Season 4 on Netflix read on.

The series takes place in the near future and centers on the protagonist Kazuto “Kirito” Kirigaya and Asuna Yuuki as they play through various virtual realities MMORPG worlds. The anime television series was aired in Japan between July and December 2012.

Moreover, the super talented cast plays the exciting anime series characters in Sword Art Online. These include the multi-talented Cassandra lee morris, starring Michelle ruff,cherami  Leigh, Kayli Mills, Yoshitsugu Matsuoka and others. All of the characters play a fantastic role which gives the strong storyline a significant boost. Thus, this is one of the reasons why the show received lots of appraises and gained 7.5/10 on IMDb and 7.2 out of 10 on myanimelist.

Sword Art Online has been available on Netflix in North America since March 2014. An animated film, Sword Art Online the Movie: Ordinal Scale, was set for theatrical release back in 2017 in Japan.

The latest anime  SAO progressive was released on 30 October 2021 in theaters only in Japan. The anime movie was released in the US and Canada on December 5 2021 and generated over $1 million in US and Canada alone. If you are wondering “Can I watch Aria of a Starless Night on Netflix?”, the answer is No.

Asuna struggles to survive with a swordsman in the game Sword Art Online with other adventures can be watched in theaters later in 2022. If the movie comes to Netflix we will update this page

Where to Watch Sword Art Online All Season Online?

Sword Art Online is available on a number of platforms including Netflix.

If you are in the US, you have:

For the UK SAO fans we have:

In Canada you can stream Sword Art Online on:

Australian SAO fans are not left behind, here are your streaming options:

We can not list every country and every streaming service here, the best way to stream Sword Art Online is on Netflix from anywhere in the world with a VPN.

1- Can I watch Sword Art Online season 1 on Netflix?

Yes, you can, All four seasons of Sword Art Online are streaming on Netflix US. Use a VPN if you are not located in the United States.

2- How to watch Sword Art Online Progressive on Netflix?

Sword Art Online Progressive is not streaming on Netflix anywhere in the world. The movie was released on 30th October 2021 in theaters in Japan. Dates for the movie to come to US and UK are still not confirmed.

Sword Art Online season 04 is available on Netflix in the US and India. Use a VPN if you are located in the UK or anywhere else in the world.

4- Who is Asuna in Sword Art Online?

Asuna is a young girl who is stuck in the game “Sword Art Online”. The latest anime movie Sword Art Online Progressive: Aria of Starless Night will tell the story of her adventures and quest to find her way out.

5- Can I watch Sword Art Online season 03 on Netflix?

Yes, you can with a VPN. If you are in the US then you only need a Netflix account. If you can’t find the third season on Netflix then use a VPN.

The fifth season of Sword Art Online is set to release on 6th November 2022 on Netflix.

7- How many episodes will be in Sword Art Online season 05?

There are no confirmations for the episode list but as per our information, there will be 25 episodes of Sword Art Online season 05 on Netflix.

There are a number of anime movies and series like Sword Art Online but not all are streaming on Netflix. But we have listed some of the best so you can watch them on Netflix. You can stream Naruto, Naruto Shippuden, Yuri on Ice, Attack on Titans, The Discastous life of Saki K, Rick and Morty (all seasons), DC Titans, Fullmetal Alchemist, Death Note, and many more on Netflix.

If you are a Japanese anime lover then this show is a treat to watch. Though it is a visual treat for the people because of how the colors of the animation blend beautifully, and how the hand-drawn anime style adds charm to every scene, it has also faced criticism for its pacing and writing.

You can watch Season 04 of Sword Art Online on Netflix by following the method we have listed and enjoy the series from the comfort of your home.