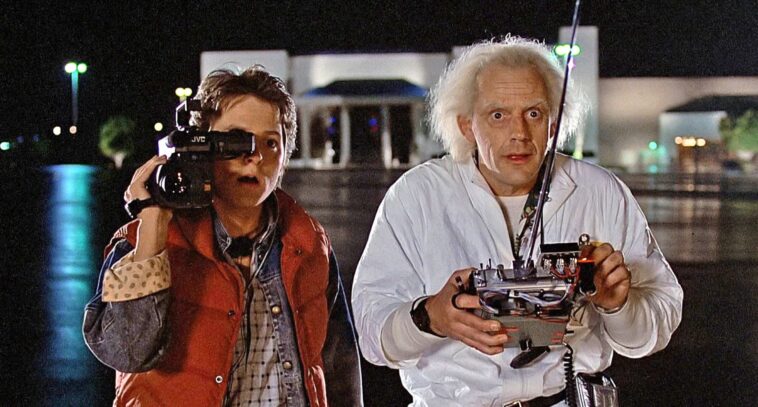 Sci-fi fans, rejoice! What we have today will surely make you forget everything and log on to your device to stream this nostalgic saga of futuristic storytelling? Confused? This time, we are covering how to stream Back to the Future on Netflix.

Back to the Future is a Sci-Fi movie starring Michael J Fox (playing Marty McFly) and Christopher Lloyd (playing Emmet Doc Brown) as the main characters while other cast members keep on changing across the installments and include the likes of Lea Thompson as Lorraine Baines-McFly, Crispin Glover as George McFly and Thomas F Wilson as Biff Tannen.

The movie is set in the 1980s and follows a young teen from California named Marty McFly, who is accidentally sent to the 1950s because of a failed experiment from one of his friends Doc Brown. In the past, Marty now has to make his parents fall in love with each other all over again or he will not exist. And on top of that, he has to return to his timeline after accomplishing this feat to save Doc’s life.

Things don’t turn out as planned for Marty and Doc as they witness a different present than what they left. In this present timeline, Marty’s father has been killed and Marty’s Rival Biff Tannen is now enjoying a successful life. After discovering Biff’s secret, Marty and Doc once again set off for a quest through time to fix things in the present.

In the third and final chapter, Marty gets a message from an older Doc who has now retired in the future and settled in a town in the Old West. Shortly after sending the message, Doc is murdered and when Marty knows of this horrific chain of events, Marty must now go through the time once again, this time to the older version of the Doc, help him snap out of love while repairing their car, DeLorean, as more threats emerge.

Back to the Future on Netflix – Trailer

Read more: How to Watch Twilight Films on Netflix US

The first movie was released on July 3, 1985, and instantly became an icon for future generations. On a less-than-modest budget of USD 19 million, the movie was a huge box office success and managed to gross more than USD 388.8 million. The movie was also well-received by the critics and has a score of 96% on Rotten Tomatoes, 8.5/10 on IMDb, and 5/5 on Common Sense Media. The movie has also received critical acclaim and managed to grab the Academy Award for Best Sound Effects Editing along with three more nominations.

Watch Back to the Future 2 on Netflix | Is it streaming?

Read more: How to Watch Ip Man [ALL PARTS] on Netflix from anywhere

Part 2 of the franchise was released on November 22, 1989, and wasn’t as well received by the critics compared to the first part. However, it still scored decently across the major sites. The movie currently has a score of 66% Rotten Tomatoes on Rotten Tomatoes and 7.8 on IMDb. However, the movie, having a decent budget for its time, USD 40 million, was once again able to pull the fans to  the theaters and grossed USD 332.5 million on the box budget. It was also nominated for quite a few awards including Saturn Awards for Special Effects, Academy Awards for Best Visual Effects, and even BAFTA for Best Special Visual Effects.

The final edition in the trilogy didn’t perform as well as the previous two installments, grossing USD 246 million on a budget of USD 40 million. However, the sci-fi flick still has good ratings on review sites including Rotten Tomatoes which shows a score of 80%, and IMDb where is rated 7.4/10. Fans still do talk about the movie as well and during its prime, it was also nominated for prestigious awards like Saturn Awards and even after that, accolades like AOL Movies DVD Premiere Award for Best Special Edition Of The Year. It also won the Saturn Award for Best Music and Best Supporting Actor Award (Tomas Wilson).

Read more: How to Watch Indiana Jones [ALL PARTS] on Netflix from anywhere

Back to the Future Netflix Countries

Following are the countries streaming Back to the Future on Netflix in 2022.

Can I Watch Back to the Future on Amazon Prime Video?

Well, the answer is yes and no. That is because Back to the Future is streaming on Prime Video but only in a limited number of countries, and the list does not include the US or the UK. If you are a BTTF Fanboy and want to watch it on Prime Video from the United States, follow these simple steps:

Note: You need an active subscription for the Prime Vidoe account to stream all the parts of Back to the Future on Amazon Prime Vidoe.

Back to the Future on rent

If you are not a Netflix streaming person and want to take things easy. Here are some options for you to rent Back to the Future online.

Frequently Asked Question to Watch Back to the Future on Netflix

1- Is Back to the future streaming on Netflix UK?

No, any installment of Back to the Future is not streaming on Netflix UK.

There are a number of ways through which you can stream Back to the Future online for Free, but all includes video piracy, which is illegal and can give you jail time, especially in the US.

3- Can I stream Back to the Future 2 on Netflix?

Yes, Back to the Future II is streaming on Netflix but not in the US. Use a VPN and follow the above-mentioned steps to watch it on Netflix.

At the moment, all three parts are not part of the Disney + library.

5- Where else can I stream Back to the Future 2 in the US?

It is streaming on Direct TV, TNT, Spectrum on Demand, and Tru TV in the United States.

Yes, you can watch Back to the Future on 4K on Prime Video. You need three things for this amazing streaming experience.

We believe, now you are fully equipped to watch back to the Future on Netflix or Prime. You can also rent the movie on Apple iTunes and Google Play Movies. Streamers from the US can stream Back to the Future Online on Direct TV or Spectrum on Demand, both are cable TV subscriptions.