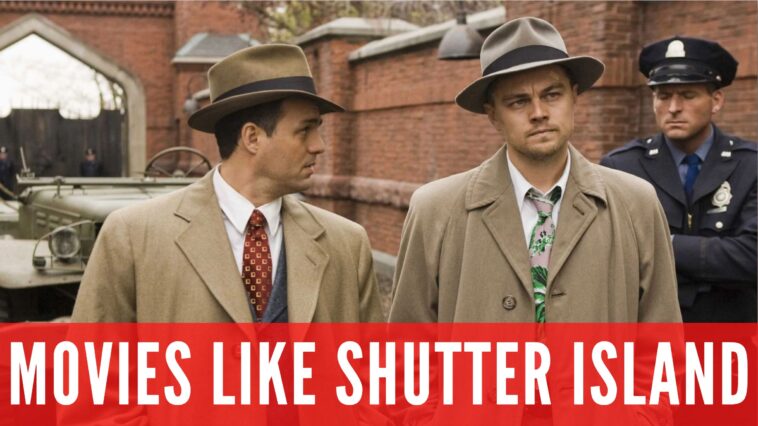 Leonardo Dicaprio’s psychological thriller Shutter Island was surely one of the most popular sinister thrillers of its time. Even today, one can rarely find a movie of its match.

Not only was Leo’s remarkable acting a reason many obsessed with this movie, but the legendary film director Martin Scorsese also gave everyone a disturbing thriller plot that stole our sleep.

If you’re also a fan of such criminal thrillers as Shutter Island, there are many movies you can explore this weekend!

Shutter island is famously known as a Hollywood ‘classic’ because of Martin’s remarkable creativity even while attempting such a thriller for the very first time. But do legends ever need practice? He is already a gifted filmmaker.

The movie is set on an island far away from where the US Marshall Teddy arrives to investigate a murder case after prolonging the case for too long. The movie revolves around Teddy’s investigation while also shedding light on the mysteries of his personal life.

It doesn’t take long for the marshall to find out what illegal and sinister activities are happening in the hospital. It isn’t only the mentally sick patients but also the doctors he finds out to be involved in crimes.

However, soon the hospital’s management restricted his investigations and limited what he could include in the case study. Mark Ruffalo here plays the role of Teddy’s friend Chuck, and Emily Mortimer plays Rachel Solando, a significant character in the movie.

If you have not watched Shetter Island, then do watch this thriller as it will twist your mind. Shutter Island is streaming on Netflix along with Prime Video, Binge, Sky Go, Fubo TV, and other streaming platforms. This movie is a product of the famous director and filmmaker Clint Eastwood’s efforts. Featuring an elite cast like Angelina Jolie as Christine and John Malkovich as Gustav, this movie is an epic mystery that can leave you sleepless at night.

It was released in 2008, and many still think it is an underrated masterpiece. Christine is a single mother who struggles to find her young son and meets several mind-bending deceptions during the investigations.

Months later, when she is informed of a boy who looks like her son, the case is closed. LAPD is the police department dealing with her case, and they never believe her when she doesn’t agree that it’s her son.

Los Angeles soon starts protesting for the mother while she never gives up searching for her only son. The movie is a package of emotional drama and crime thrillers, just as shutter island. Among the list of movies like Shutter Island, we rank this one first and foremost.

Where to Watch Changeling

Changeling is streaming on a number of OTT platforms around the world. In 2010, the black swan had a dark theme similar to Shutter Island’s. It is a drama-thriller that focuses on Natalie Portman, who plays Nina Sayers, a ballerina passionate about her art. She is not only an aspiring dancer but also one widely admired.

The movie revolves around Nina and her thoughts when she has to face competition for her dancing skills.

The dance director, looking for two girls to play the ‘swans’ in his next show, finds Nina unfit for a role even after accepting her from auditions. Nina starts having hallucinations and weird dreams about being replaced. She isn’t only in a dark state of mind but also destructive.

Do you remember how the climax in Shutter Island was all about Teddy and his thoughts at the end? Well, if you like those types of movies, add this to the list! The movie also features Vincent Cassel and Winona Rider in key roles.

You know Director Darren Aronofsky has done a remarkable job when Natalie Portman wins an academy award for her acting in the movie. This movie is the best choice among movies similar to Shutter Island.

Where to Watch Black Swan

Black Swan was nominated for a number of academy awards in 2011. This Shutter Island-like movie is streaming on a number of OTT services. Fight club is an action-thriller that stars Brad Pitt and Edward Norton as the main roles. This David Fincher 1999 release is surely something you would find intriguing.

While Brad is a careless person living a life that he wants to change, Tyler (Edward) is also no different, in the fact that he doesn’t take a step and has serious insomnia issues. Both become pals soon after their weird meetup as strangers.

Fight Club is where Brad teaches young boys to wrestle and trains them to fight. At first, the Club is just a random training school before turning into something darker and more dangerous.

David Fincher combines many themes effectively in the movie and leaves deep life lessons for the viewers.

Fight Club is considered to be one of the best mind-twisting movies like Shutter Island. The movie features Brad Pitt as Tyler Durden, an iconic performance by the actor which is still cherished and remembered. You can watch Fight Club on the following streaming platforms: Memento is a 2001 classic mystery-thriller genre movie remade even in Bollywood. Christopher Nolan didn’t have a smooth plotline for this one, but he also worked the hardest.

Guy Pearce plays Leonard Shelby’s leading role, a patient with anterograde amnesia searching for the killer of his wife. More than a tragic lover seeking vengeance, this movie is a psychological thriller that develops a whole narrative.

With tattoos drawn and notes written all over his body, Lenny looks like a sociopath with anger issues and emotional disorders. If you are a fan of movies that play with the mind and offer a climax that makes two ends meet smoothly, Memento is a masterpiece.

Memento has just the level of mystery that we saw in Shutter Island. The movie was released in 2001 in the USA and earned a huge box office of 40 million dollars quickly.

Memento was the first movie by the famous director Christopher Nolan. The movie keeps you mind busy analyzing what is happening. The movie can be watched on the following platforms.

Also Read: Where to watch Jurrasic Park (all movies) online in 2022 Get Out is a horror movie that combines many deep themes into one movie and is analyzed by so many people for the scary symbols and imagery it contains. Get Out is one of the movies like Shutter Island that are more horror-like.

Jordan Peele starts with the problems being a black American can have. Visiting his girlfriend’s house for the first time, Chris is nervous and excited at the same time.

Although the couple faces an accident on the way, everything seems to be normal on the surface at first. Little did the couple know that the most sinister depths and secrets lay in Rose’s (his girlfriend) house.

Her parents seem suspicious to Chris at first, but he is soon trapped deep enough that he can “get out” as quickly as he got in.

You can watch Get Out on the following streaming Platforms.

Also Read: 7 movies you should watch if you loved Inception David Lynch put all his effort and creativity into Mulholland Drive, a thriller featuring Naomi Watts and Laura Elena Harring. Harring, who plays Rita, faces a weird accident after which she forgets her identity and many facts related to her life.

She turns paranoid and doesn’t know a thing while wandering around Los Angeles, a city of both lights and darkness. She meets in uncertain circumstances with an aspiring actress Betty who came to Hollywood to pursue her dreams.

Betty helps Rita figure out her messed state of mind and their relationship develops in the movie while the mysteries are solved. The movie is rated 8/10 on IMDb and is surely one of the greatest thriller movies of all time.

Mulholland Drive is known for its mind-boggling story and the famous lesbian scene. The movie is available on multiple streaming platforms.

Also Read: 7 Psychological Horror Movies Like Hereditary That Will Blow Away Your Mind

This movie is surely an underrated psychological thriller with a plot that will blow your mind. Jacob’s ladder focuses on themes like thriller, family, and horror. We recommend you to check out the older version of this movie which was released in the 90s.

If you want to add that to your watchlist, it is also a top among Shutter Island films. The 2019 movie is much more developed not only in plot but also in direction. Michael Ealy in the 2019 film plays the role of the protagonist Jacob Singer while Jesse Williams plays Jacob’s brother Isaac Singer.

Jacob’s mind slips into paranoia when he realizes his brother might be in danger the can’t fathom. The movie begins with the death of Isaac Singer, which is tragic but a normal death.

However, when Jacob finds out that his brother might not be dead or maybe didn’t die the way he saw it, everything begins to question itself, and sinister consequences follow. The 2006 Nolan movie Prestige is a serious drama that adopts a fun theme of magic and tragedy. With a legendary cast like Christian Bale, Michael Caine, Scarlett Johanson, and Hugh Jackman, this movie is a luxury gift to Hollywood cinema.

It focuses on how magicians fool the world from a surface while magic can be as deep and dangerous as anything else. Magic tricks are more than just fooling the mind. They are games of the masters.

And when turned dark and evil, magic can be the eeriest of rivalries. This movie is about passion, fame, love, and, most importantly, sacrifice.

The Prestige is one of our top recommended mind-bending movies of all time. Loaded with a super cast like Cristian Bale (The Dark Knight) and Huge Jackman (Wolwareen), this movie will twist your mind as Shutter Island did.

Christopher Nolan’s Inception is undoubtedly a masterpiece. Like every other movie by Nolan is a mix of psychological mystery and mind-games, so was Inception.

It is surely surprising if you’re a fan of psychological thrillers and you haven’t watched Inception yet. Leo plays the role of Cobb, an expert on the science of dreams.

Cobb specializes in entering a subject’s dreams and steals or plants information in their heads as clients demand. However unusual this job may sound, it is a matter of life and death, family and love for Cobb.

After losing his wife in limbo due to uncertainties in this work, Cobb is now off to a final mission that would end things once and for all. His colleagues Arthur (Joseph Gordan) and Earners (Tom Hardy) also play a significant part.

The movie has a confusing and puzzling plot that leaves many instances open to the viewer’s interpretation. Leaving key questions unanswered is Nolan’s specialty.

The never-ending debates Nolan’s movies leave behind are sure as artistic as anything else. So if you’re ready for yet another epic and puzzling performance by Leonardo DiCaprio, add this movie next on your list.

Inception is streaming on Netflix and other OTT platforms. Here is a list of streaming platforms through which you can watch this mind-bending movie like Shutter Island.

Horror and thriller movies are surely an addiction once you get into them. These movies are not only masterpieces but also a must-have for your watchlist if you’re searching for movies similar to Shutter Island. So don’t wait for the next weekend; add to your list right now!