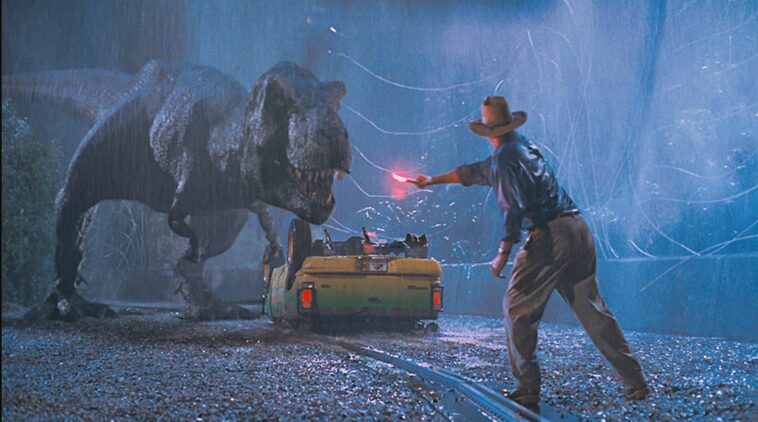 Jurassic Park, also known as Jurassic World, is a series of films based on the themes of brutal and disastrous dinosaurs and their species.

The film shows an inspired billionaire and creator of the bio-engineering company, John Hammond. However, on Isla Nublar, the only dinosaur is preserved. In an experiment, three experts, including paleontologists, Dr. Alan Grant, Dr. Ellie Sattler, and a mathematician, Dr. Ian Malcolm, observed a terrifying wonder that happened. The experiment births a dreadful reptile, Tyrannosaurus Rex, who escapes in search of fresh meat. Give this film a look and find out how the people face such dangerous species.

Jurassic Park is one of the successful films, grossing over $912 million across the globe, and became the highest-grossing and the best film at that time, Critics praised the screenplay and the star’s performances. The film received a 92% rating on Rotten Tomatoes and an 8.2/10 rating on IMDb. The film is worth watching as it provides eye-catching action and thriller produced by that horrible reptile.

Fun Fact: In October of 1994, Jurrasic Park, Forest Gump, Pulp Fiction, and The Shawshank Redemption were all in Cinemas at the same time.

Where to Watch Jurassic Park 1 Online

Jurassic Park 1 was released in 1993 and immediately became a cinema sensation. The movie is streaming on a number of VOD platforms. Some of them are listed below:

The film focuses on an entrepreneur, John Hammond, who is spending his time studying antique relics roaming around on the island of Isla Sorna freely. Dr. Ian Malcolm and his girlfriend, Sarah Harding, join John in this mission. Hammond’s nephew, Peter, is also determined to explore such species in the San Diego prehistoric zoo.

These two groups work on the same mission separately; one group has some biological data. The other, which InGen is leading, has something phenomenal in mind to bring dinosaurs back to the United States.

Should they team up? But the conflict among them is dangerous, which means the unity of these groups is somehow difficult. Watch this SciFi film and see how these two groups provide some eye-catching adventures and action.

The Lost World: Jurassic Park received positive reviews for cinematography and cast performance. IMDb gives it a 6.5/10 viewers rating while Rotten Tomatoes rated it 53%. The film is incredible and worth watching as you cannot predict what will happen next in the sequel.

Where to Watch The Lost World: Jurassic Park Online

The Lost World is considered to be the best movie in the Jurassic Park franchise, the movie was successful on the box office because of its story and several other factors like no competition, and massive distribution of the movie.

The Lost World is available on a number of streaming services in different countries, We have listed some of the VOD platforms where you can watch The Lost World.

The Lost World is available on Netflix and Prime Video, but you can stream it only from Australia. If you are residing in the US or UK, follow these simple steps to watch The Lost World.

Following the Lost World: Jurassic Park, this film shows that Dr. Alan Grant is satisfied with his life, and he believes that he is now highly away from the danger of dinosaurs. However, Paul Kirby is a wealthy businessman with his wife who offers Dr. Alan Grant their cooperation in a tour of island Sorna.

Dr. Alan needed some money for the research, so he accepted this offer, but he was unaware of Paul’s plans and wanted a dinosaur professional to find his son, Eric. While paragliding Eric crashed on this island.

You are highly recommended to catch this part of the Jurassic Park series as you will find it to be impressively adventurous in the film.

Jurassic Park III is an excellent film in the Jurassic Park series, which was successful on the box office. Critics praised the visualization and storyline of the film and gave it a good overall rating. This epic film received a 48% rating on Rotten Tomatoes and a 5.9/10 rating on IMDb.

Is The Jurassic Park Franchise on Netflix?

Unfortunately, the Jurassic Park series is not completely available on Netflix. The second part of this franchise “The Lost World” is streaming on Netflix. You can also watch Jurassic World: The Fallen Kingdom on Netflix with a workable VPN.

Can I Watch Jurassic Park Series on HBO Max?

Yes, Every movie of Jurassic Park (1, The Lost World and 3) is available on HBO Max, but due to geo-restrictions, you can only watch HBO Max in the United States. Therefore use a VPN and stream the complete series of Jurassic Park on Prime.

Are Jurassic Park Movies on Disney Plus+

The Jurassic Park series is one of the few remaining movies that are not available for Disney+ subscribers. The series is not streaming on Hotstar, Starz or any other Disney+ fraction. If you are located in Australia and want to stream Hotstar in Australia then use a VPN and watch unlimited movies and TV shows on Hotstar.

We have listed all the VOD services on which the Jurassic Park series are streaming. The movies can also be rented on Amazon Video, Apple iTunes, Google Play Movies and Other stores. The best way to watch Jurassic Park movies before Jurassic World Domino is on Prime Video.