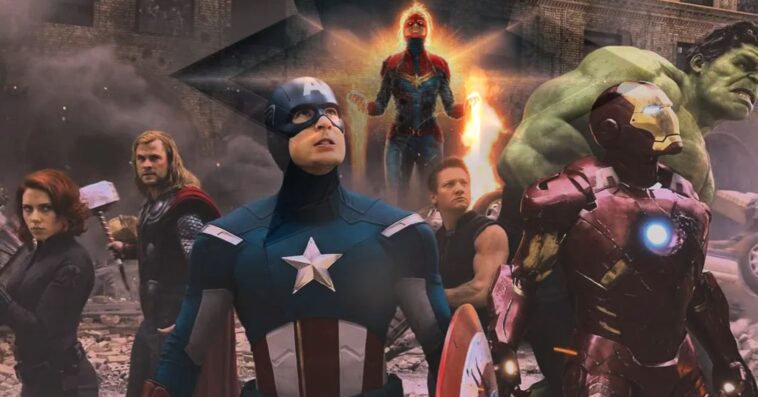 Marvel Studios is an American film and television production company known for producing the Marvel Cinematic Universe films based on characters that appear in Marvel Comics publications.

Note: All Marvel movies were removed from Netflix in May 2022 (except Spiderman)

The Marvel Cinematic Universe spans from Phase one to Phase three till 2021. However, Iron Man 1 was the first film of MCU in Phase one, produced in 2008. The Avengers concluded phase one. However, phase two begins with Iron Man 3, released in 2013, and ends with Ant-Man (2015). Captain America: Civil War (2016) started Phase three, and Spider-Man: Far From Home (2019) culminates this phase. The films of Phase Four began with Black Widow (2021).

Marvel fans from every corner of the world keep wondering “What Marvel movies are on Netflix” Therefore this article gathered all the Marvel movies on Netflix streaming in 2022.

Iron Man is an American superhero film based on Marvel Comics that stars Robert Downey Jr. in the lead role of Tony Stark (Iron Man). The film shows that a powerful terrorist organization kidnaped the brilliant Tony Stark. However, Tony manages to escape using an iron suit from scrap metal and spare parts. After returning home, he spends all of his time and resources making that iron man suit better so that he can use it to fight evil and save people.

Iron Man 1 is streaming on Netflix but in a limited number of countries. You can also watch it on Disney+

Iron Man 2 is the sequel film of Iron Man (2008), released in 2010. Marvel Studios produced this Marvel Comics-based film. The film follows the storyline of the first iron man film, and now the world is well aware of his life as the superhero Iron Man. In this film, Tony Stark was pressured by the government as the government wanted him to share his technology with the forces. However, he declined to let go of his invention. As a result, Stark, along with Pepper Potts and James “Rhodey” Rhodes, must create new alliances and face powerful enemies.

Iron Man 2 is available on Netflix only in Canada. If you are from the US watch Iron Man 2 on Netflix with a VPN. You can also watch it on Disney+

Iron Man 3 is the sequel film of Iron Man (2008) and Iron Man 2 (2010), released in 2013 as part of MCU Phase three. Marvel Studios produced this Marvel Comics-based film. The film shows brilliant industrialist Tony Stark/Iron Man against an enemy whose reach knows no limits. However, Stark understood that this enemy would destroy his world. So Tony’s journey begins to be tested to protect his loved ones.

The Incredible Hulk is an American superhero film and was the second film in the MCU. Marvel Studio produced this Marvel Comics-based character film. However, This film shows the events after the Gamma Bomb. ‘The Incredible Hulk’ informs the story of Doctor Bruce Banner. Bruce gains a cure for his unique condition, which causes him to turn into a giant green beast.

The Incredible Hulk is streaming on Netflix only in Canada. You can watch the movie on Netflix with a VPN or watch it on Disney Plus.

Captain America: Civil War is a sequel film to Captain America: First Avenger and Captain America: Winter Soldier. Marvel Studios produced this American superhero film based on the Marvel Comics character Captain America. In this film, superheroes are divided into two groups led by Captain America and arrogant Tony Stark. Superheroes’ faction separates themselves into two teams. However, Bucky Barnes is behind the murder of King T’Chaka, a member of one of the factions, and his son plans to kill Bucky.

Thor: The Dark World was released in 2013 as a sequel film to Thor (2011). This Marvel Studios produced American superhero film is based on the Marvel Comics character Thor. The film shows the return of Thor to combat with Malekith. He was the leader of a primordial race that wanted to destroy the Nine Realms. However, even Odin couldn’t protect Asgard from the darkness. Thor reunites with Jane in a plan and saves the world.

Marvel Studios introduced another Marvel Comics character, Doctor Strange. This superhero film was released in 2016. Doctor Strange faces a terrifying car accident for which Stephen Strange must find a way to cure his hands. Kamar-Taj in Nepal teaches him the courses of mystics and alternate realities. However, Stephen soon discovered that he had to protect the world from magical threats.

Can you watch Marvel movies on Netflix for free | with a free VPN?

The short answer is, No you can not.

We have tested several free VPN services and none of them could provide the premium streaming experience that ExpressVPN does.

We faced the Netflix error code M:7037-1111 many times along with frequent disconnections. Therefore we recommend ExpressVPN because of its highly optimized servers and cutting-edge technology.

We have tested ExpressVPN to unblock US Netflix in Canada and American Netflix in the UK and it worked every time.

Marvel Studios became successful in redefining the Marvel Cinematic Universe (MCU). MCU is now the highest-grossing film franchise across the globe. However, It has gained three top-ten entries from 2017 every year, including two out of the three number ones (Black Panther in 2018 and Avengers: Endgame in 2019, the second highest-grossing movie of all time). Marvel Studio is still working to produce more masterpieces like these, so these films mentioned above are worth watching if you are interested in superheroes and love their stories.

The franchise has been commercially successful and has generally received positive reviews. In addition, it has inspired other film and television studios to attempt to create films like these using comic book characters.

We have done our work and now you can easily find out which Marvel movies are on Netflix and how you can watch it. Due to the distribution rights, some MCU movies were removed from Netflix in the US and UK. But with a VPN you can Unblock the full potential of Netflix and stream all Marvel movies on Netflix from anywhere in the world.