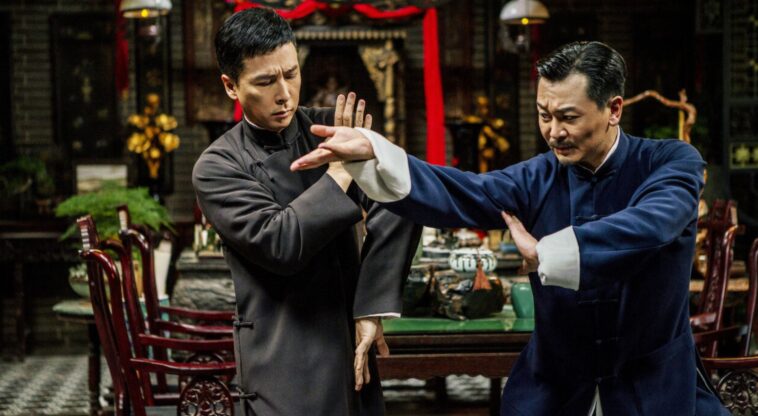 Today. We’re going to cover a Hong Kong action movie series by the name of Ip Man. I’m sure you guys have heard the name. The movie is about a martial arts master, Ip Man, who specializes in the art of Wing Chun, a Chinese martial art style that focuses on rapid arm movements. If you are here to find out how to watch IP Man on Netflix read on.

This movie stars Donnie Yen whose fame has skyrocketed all over the world mainly because of his iconic portrayal of Ip Man. The first part of the movie came out in 2008 and since then, the movie has had 4 parts with the last one called Ip Man 4: The Finale, coming out in 2019. All the parts have been directed by Wilson Yip and produced by Raymond Wong with Edmond Wong being the key writer.

The cast of the movie includes Lynn Hung as Cheung Wing-sing, Li Chak as Ip Chun, Simon Yam as Chow Ching-Chuen, Calvin Cheng as Chow Kwong-yiu, Louis Fan as Kam Shan-Chau alongside others, and of course, Donnie Yen as the main character, Ip Man.

How to watch Ip Man (2008) on Netflix from Anywhere

Ip Man has a lot of parts for someone trying to catch up with all of them today. The first part deals with survival. The movie is set in Foshan, China, and takes place somewhere between the Sino-Japanese War, and tries to visualize the horrific events of that time where people had to fight for a mere bag of rice.

Ip Man 1 is streaming on Netflix but not in all the countries. If you are in the US and want to watch Ip Man on Netlfix, here is what you need to do:

Read more: How to watch Spider-Man 3 on Netflix US

Part 2 is about adaptation and making a living. The movie narrates Ip Man and his family moving from Foshan to Hong Kong where Ip Man plans to open up a martial arts school to teach Wing Chun to the new generation. He is, however, met with resistance by a Hung Ga Master, Hong Zhen Nan (Played by Sammo Hung). As Ip is drawn into a darker world, he also has to fight a ruthless boxer by the name of Twister (played by Darren Shahlavi).

Ip Man 2 is on Netflix but you can’t watch it from the US. Here is what you need to do to catch the movie on Netflix:

The third part of the franchise deals with life and takes the user back to Ip Man’s time where he’s now forced to confront a corrupt land developer and his henchmen, trying to take over and run the city.

If you are wondering how to watch Ip Man 3 on Netflix from the US, follow these simple steps:

How to Watch Ip Man 4: The Finale on Netflix | Ip Man 4 Netflix

The fourth and final part takes on racial discrimination and tells the story of Ip Man traveling to the US with his son in pursuit of a better life, all the while dealing with bigotry issues. Ip Man’s student has started teaching martial arts to non-Chinese students which caused an issue in the martial arts community. Ip Man 4 is streaming on Netflix, if you are residing in the US follow these steps to watch Ip Man 4 on Netflix from anywhere in the world.

Read more: How to Watch Hell on Wheels on Netflix from Anywhere

Ip Man franchise is available on Netflix in the following countries

How to Watch Ip Man Movies on Prime Videos [All Parts]

All the Ip Man movies are available for streaming on Amazon Prime Videos but not in all countries. If you are outside the US and want to stream the Ip Man series on Prime, follow these steps:

If you are not a Netflix subscriber and still want to stream Ip Man, here are your options to rent it online.

Ip Man was streaming on Netflix US but now it is gone. Use a VPN to watch it from the US

Yes, Ip Man is on Netflix but in a limited number of countries. You can watch it with Express VPN and a UK IP address.

Yes, All the Ip Man movies are dubbed in English on Netflix.

5- Is the real Bruce Lee in the Ip Man movie?

No, it is just the character played by another actor. In reality, Bruce Lee was trained by the legendary Ip Man.

Yes, Mike Tyson fights Ip Man in the third part of this series.

All of the movies have performed well on the Box Office as well. The movies in total have grossed USD 426.2 million on a budget of USD 140.6 million.

Ip Man movies are some of the best martial arts movies produced in the history of cinema. After reading this blog we can assure you, you can watch Ip Man 1-4 on Netflix from anywhere. If you are a Prime Video subscriber, we have listed a solution for you as well. You can also rent movies on Apple TV or Amazon Videos.