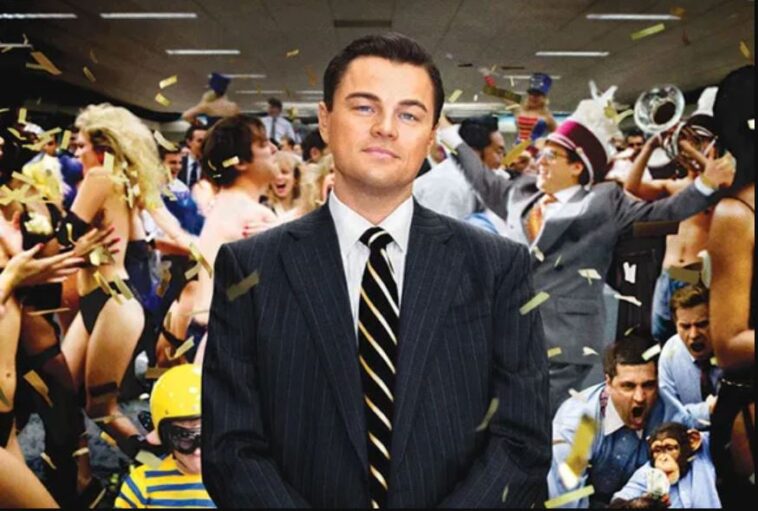 The wolf of wall street is surely one of the most famous and liked stock market movies of the time. Leonardo DiCaprio plays Jordan Belfort, ambitious and motivated to make his way up through the stock market after the biggest crash took place.

He joins hands with his friend and work partner Donny Azoff to start a brokerage firm. While the firm grows significantly on Wall Street, the FBI’s concerns do too.

Belfort is a star of the parties, and when the brokerage firm starts earning fat profits out of initial offerings of giant companies, the team spares nothing. From booze and beer pong games to being high on weed, Stratton Oakmont (the brokerage firm) celebrates like there’s no tomorrow!

The FBI is someone Jordan avoids meeting face to face. The movie is directed by Martin Scorsese, who is already much known for such movies in Hollywood. Just for your knowledge, The Wolf of Wall Street is streaming on Netflix, so watch it right now. Catch me If you Can is a big box office movie in 2002. From Leo’s tempting romance to changing personalities, this movie grabs the essence of an attractive criminal.

This crime-drama masterpiece was directed by Steven Spielberg and is based on a book that narrates an autobiography of the protagonist Frank Abagnale. Frank is a con who is good at acting up and fooling people since his early life.

Who can ever come to think that the ‘skill’ of fooling and deceiving others can help you make a tonne of money? Frank is still a high-school student when he starts to earn a fortune with zero investment, only talent.

To earn millions from scratch, Frank fools the biggest of tycoons. The FBI agent Carl Hanratty is soon in search of the con man and is out there to end the crimes Frank is spreading.

Famous for the tagline “The true story of a real fake”, the movie focuses on an innovative deceiver who has been searching for appreciation and admiration since early life. This movie is rated 96% on Rotten Tomatoes.

Where to Watch Catch Me If You Can Online:

Boiler Room is another Drama-Crime movie that The Wolf Of Wall Street fans might love watching. With Vin Diesel’s remarkable boss role and Giovanni Ribisi’s elite acting, this movie was an underrated masterpiece of Bollywood.

It is directed by Ben Younger, who is known most for such stock market movies. A group of friends who are college dropouts shares the same ambition to make money.

This team joined hands to start a brokerage firm that soon gained much popularity among the city’s investors. This hot performing brokerage is soon rated high, but greed kicks in to ruin things soon.

Boiler Rooms are a real activity within the stock market whereby the brokers misguide investors and fool them into making an investment that might not gain them as much of a return as the boiler room promises.

The investment might also be unverifiable so the investor can’t always cross-check. Boiler Room is a movie on life lessons, greed, hard work, and corruption.

It is just as much of an intelligent creation as The Wolf of Wall Street, so if you like movies on stock brokerage and stock market politics, this one’s for you.

Where to Watch Boiler Room Online:

Boiler Room is available on the following streaming services:

This is a Duo movie, the type where two friends loyal as anything is out there to rule the world! David and Efraim are offered a big deal from the Pentagon, an opportunity two minor ‘gun runners’ can’t let go of easily.

The movie is said to be based on a true story where the US government was sold back some arms and ammunition. Many say that the real story is way crazier, which would have been nearly unbelievable for the audience.

War Dogs contains dome dark humor which might not be your type if you haven’t watched The Wolf of Wall Street yet. But if you have, this is worth adding to the list!

War Dogs is directed by the talented Todd Phillips and written together by Stephen Chin and Jason Smilovic. The crew of this Warner Bros movie features Johan Hill as Efraim Diveroli and Miles Teller as David.

Where to Watch War Dogs Online:

The Founder is a movie based on a random salesman who decides to change his life after he meets the tycoons of the food chain business McDonald’s. If you love the wolf of wall street, this one is just as much of a motivational movie!

Michael Keaton plays Ray Croc, the protagonist who meets the owners of the South Californian burger business and decides to transform the fate of the mediocre burger and turn it into a huge empire worth millions.

The movie focuses on the struggles in Ray’s personal life and work-life as he begins to work on his growth.

The movie stars Nick Offerman and John Caroll as Dick and Mac McDonalds and Patrick Willson as Rollie.

Where to Watch The Founder Online:

The Founder defines the life of a salesman and the challenges he faced when he decided to change his life. The movie is available on a number of streaming services, some of them are listed below: “I, Tonya” is one of the rare movies like The Wolf of Wall Street that focus on the success story of a female protagonist. Directed by Craig Gillespie, the movie focuses on the sport ‘ice skating’, the only true meaning Tonya Harding has in life.

This movie is slightly altered but based on a real-life skating scandal in the 1994 Olympics. Margot Robbie’s stunning performance in this black comedy movie is surely worth a watch if you’re looking for a comedy plus motivational movie.

The movie is based on the transition in an Olympics champion’s life and the challenges her married life (or ex-husband) faces.  While keeping it humorous, the movie is also just as tragic as the real-life story of Tonya Harding.

The tone of the movie is wicked but funny from the very start. So if you want to watch some brave women who never let go of their dreams, I Tonya should be on your list!

Where to Watch I, Tonya Online:

I, Tonya is available on a number of streaming platforms around the world, some of them are listed below:

This is an American crime drama based on the wealth-making story of four LA boys. The boys are all you ever demand of, good grades, a college degree, looks, talent, ambition, and a pinch of a greedy mind.

The movie features Ansel Elgort in the role of Joe Hunt as an investment scammer who would realize the consequences of his job soon, hopefully before it’s too late.

The director James Cox is known for biographical movies that focus on the struggles and ups and downs of a character’s journey through career-making.

The movie is available on the following streaming platforms: Margin Call is a thoughtful and underrated movie based on the biggest financial crisis that ruined many lives.

After a huge finance company fires the head of the department, he goes to investigate the true reasons for what happened with their company and how. Directed by J.C. Chandor, the movie is a very carefully planned plot about the financial crisis that hit the world.

The beginning of this crisis takes place in an investment bank where some key thinkers plan out how to resolve the crisis at hand.

Where to Watch Margin Call Online:

Margin Call tells the story of an investigator who is after a powerful company. The movie is available on the following streaming services:

The Social Network is an intelligent and carefully designed movie based on the themes of ambition, friendship, and loyalty. Mark is a Harvard second-year student with a fear of being the ‘second-best’ in the room.

Joining Clubs and winning championships in societies might not be his core strength, but programming is. After a small social networking site, Mark creates with his best friend Eduardo’s help for ‘rating’ girls inside Harvard, both grow famous at the university.

Even though Mark’s girlfriend dumps him for this act, he feels good for the appreciation he receives for this application.

However, he is soon called out by the administration for this ‘disrespectful’ activity. Soon after, Mark carries on with his ideas of a ‘social networking site’ where people can make friends and know each other without even meeting in real life!

Facebook is soon the biggest test of friendship in Eduardo and Mark’s life. The Social Network is directed by David Fincher and casts Jesse Eisenberg, Andrew Garfield, Justin Timberlake, and Armie Hammer in the main crew.

Where to Watch The Social Network Online:

The Social Network tells the story of a genius boy, who later became one of the most influential and richest men in the world. Yes, you have guessed it right “Mark Zuckerberg”. The movie is available on the following streaming services:

These movies are surely the best new Hollywood movies that you can add to your list if you’re obsessed with The Wolf Of Wallstreet or Leo’s “big-shot” acting. Make sure to leave reviews after you have watched!