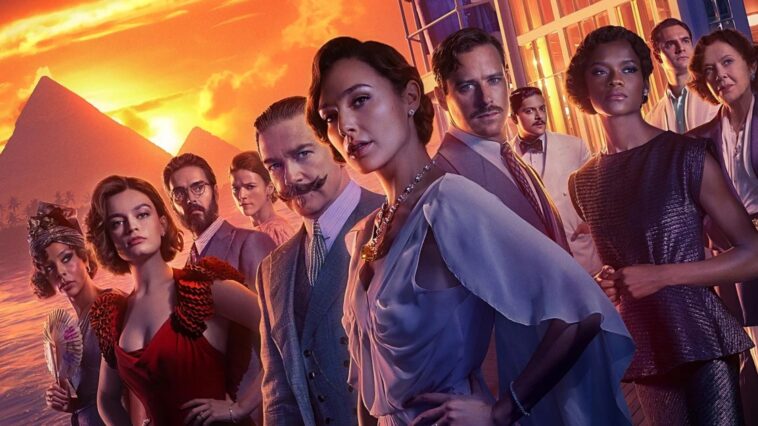 Death on the Nile is a Kenneth Branagh and Gal Gadot starrer mystery thriller movie directed by Kenneth Branagh himself and is based on a novel by Agatha Christie. The movie was put on hold because of COVID-19 and Armie Hammer scandals but is now set to release on February 11, 2022.

There is a catch though. This star-studded movie is exclusive to theaters for the next couple of months and there is no news on when it will be on Disney+, the platform where the movie will first land once it leaves the theaters, will make it available on their app/website. However, the suspense/thriller will surely land on Disney+ and we will be sure to share the details with you binge watchers over here as soon there is any update on the movie’s release date on Disney Plus. So keep visiting The Stream Bible.

Also Read: How to Watch Better Call Saul Season 06 on Netflix in US

The plot is that of a murder mystery. S.S. Karnak, the steamer full of influential people is enjoying peace when the news of a passenger’s murder spreads across the cruise. Coincidentally, Hercule Poirot, the world’s finest detective is on-board as well and it is up to him to resolve this mystery and find the killer in time.

Where to Watch Death on the Nile Online?

If you are wondering where you can stream Death on the Nile from Canada, UK, USA  and Australia then here is a list for you:

Read More: How to watch Tokyo Vice in Canada

Shooting for the movie lasted between 30th September 2019 and 18th December 2019 and was scheduled for a release in 2020 but due to Armie Hammer’s rape allegations and COVID, the movie’s release date got pushed back. At a certain point, it seemed that the movie will either have another actor portray the role of Simon Doyle and all the Armie Hammer scenes will be reshot, or that the project will be canceled. However, the team at Disney decided to go with Armie’s shoots and the movie is finally released on 11th February 2022 in Theaters.

Read more: How to Watch The Kardashians in Canada

Is Death on the Nile on Netflix?

No, Since the movie is streaming on Disney+ around the world. There is no chance that Netflix can get a hand on this movie.

Death on the Nile – Trailer

Death on the Nile on Disney Plus – Cast

The movie has a totally packed cast and some of the key names that are sure to attract viewers to their nearest theaters include Tom Bateman who’s playing the character Bouc, Annette Bening playing Euphemia, Russell Brand portraying Linus Windlesham, Ali Fazal as Andrew Katchadourian, Dawn French as Mrs. Bowers, Gal Gadot as Linnet Ridgeway-Doyle, and Armie Hammer as Simon Doyle, along with Rose Leslie, Emma Mackey, Letitia Wright, Sophie Okonedo and Jennifer Saunders.

Death on the Nile in Canada – Reviews & Ratings

Of course, since the movie hasn’t premiered yet, critics haven’t been able to review the movie and assign their respective scores to the Gal Gadot starrer. However, once the movie hits the theaters and gets reviewed by critics like Rotten Tomatoes, IMDb and Roger Ebert, The Stream Bible will be the first one to provide that information. As a sign of things to come the original novel upon which the movie is based, has a Goodreads score of 4.1 out of 5 so you can expect this movie to deliver and best-ranked among one of the best movies of 2022.

After reading this blog we believe you are fully equipped to watch Death on the Nile in Canada on Disney Plus. If you like thrillers and detective kinds of movies you are going to love this movie. Do watch Murder on the Orient Express before it, the two do not have any connection but you will get the taste of what you are about to experience on February 11, 2022.