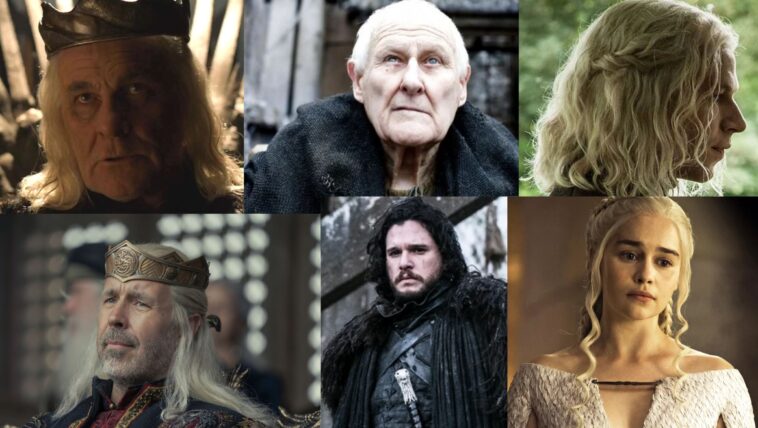 Set over a century before the events of Game of Thrones, House of the Dragon is a highly anticipated prequel of the pop cultural phenomenon exploring the history of House Targaryen in Westeros. The spin-off focuses on a tumultuous period called Dance of the Dragons – the time when the question of succession split the Targaryens into multiple factions and led to a vicious civil war.

To better understand the main characters’ motives in the upcoming series, here is a quick refresher on the Targaryen family tree that starts with Aegon the Conqueror and ends with Aegon VI Targaryen, aka Jon Snow.

The history of House Targaryen starts with Aegon I Targaryen, also known as Aegon the Conqueror. Born at Dragonstone, he was the first Targaryen to conquer and rule Westeros alongside his dragonrider sisters, Visenya and Rhaenys. To keep the bloodline pure, Aegon I had married both of his sisters and had two sons: Aenys I with Rhaenys and Maegor I with Visenya.

As Aegon the Conqueror’s eldest son, Aenys took the Iron Throne after his father’s death. He married Alyssa Valeryon and had six children: Aegon, Viserys, Jaehaerys, Rhaena, Alysanne, and Vaella. However, his reign only lasted for five years.

After the death of his older brother, Maegor seized the throne. He took six wives throughout his life but could never father a child. When Aegon Targaryen, the oldest son of Aenys Targaryen, announced his claim to the throne, Maegor killed him. Later, he forcibly took his niece Rhaena as his wife. He was eventually found dead on the Iron Throne.

Jaehaerys I Targaryen, the Old King, was the most beloved ruler in the history of Westeros. His reign was peaceful and prosperous, lasting more than 50 years. He had married his sister Alysanne and had 13 children: Aegon, Daenerys, Aemon, Baelon, Alyssa, Maegelle, Vaegon, Daella, Saera, Viserra, Gaemon, Valerion, and Gael.

After Baelon died unexpectedly, Jaehaerys and the Great Council named Viserys as the heir to the Iron Throne. As a result, Rhaenys has been dubbed The Queen Who Never Was.

House of the Dragon begins with the rule of Viserys I. He had a daughter named Rhaenyra with his first wife, Aemma Arryn. Later, he took Alicent Hightower, the daughter of Hand of the King, Ser Otto Hightower, as his second wife. They had four children: Aegon II, Helaena, Aemond, and Daeron.

Viserys I wanted Rhaenyra to be his heir, but the belief that a woman shouldn’t be able to inherit the crown stood in his way. His death marked the end of the Golden Era of the Targaryens, leaving his daughter Rhaenyra, firstborn son Aegon, and younger brother Daemon fighting for the Iron Throne.

Rhaenyra is one of the central characters of House of the Dragon. Her half-brother Aegon II and her uncle Daemon Targaryen contested her claim to the Iron Throne. She first married Laenor Velaryon and had three sons: Jacaerys, Lucerys, and Joffrey Velaryon.

However, after the death of her husband, the dragonrider married her uncle, Daemon. They had three children together: Aegon III, Viserys II, and Visenya.

Daemon, the younger brother of Viserys I Targaryen, considered the Iron Throne his birthright. He was also a peerless warrior and a seasoned battle commander. After the king’s death, he returned to King’s Landing to lay his right to the crown, which put him at odds with Rhaenyra.

After the death of his first wife, Rhea Royce, Daemon married Laena Velaryon, the sister of Laenor Velaryon. They had two daughters: Rhaena and Baela Targaryen. After Laena passed away, he married Rhaenyra and had two sons: Aegon III and Viserys II.

Aegon II ascended the Iron Throne after his father’s death. He was a cruel and promiscuous king who decimated cities, killed the innocent, and split the realm during his battle with his half-sister Rhaenyra. He had wed his sister, Helaena, and had two sons who died at a young age during the Dance of the Dragons (a civil war in House of the Dragon).

Eventually, he brutally executed Rhaenyra in front of her young son, Aegon III. Soon, he was poisoned by his own men. Ironically, the throne went to his nephew Aegon III since Aegon II did not have living heirs.

The ascend of Aegon the Younger to the Iron Throne marked the end of Dance of the Dragons. However, he was an emotionless king who was traumatized by his mother’s execution, where she was eaten alive by a dragon. Nonetheless, his reign saw unity in the Seven Kingdoms. He was also guided by his brother Viserys II as the Hand of the King.

Aegon III took his cousin Jaehaera as his first wife. After she killed herself, he married Daenaera Velaryon and had five children: Daeron, Baelor, Daena, Rhaena, and Elaena.

When Aegon III died at age 36, his firstborn son, Daeron I Targaryen, ascended the Iron Throne. However, his reign was short-lived as enemies killed him at 18. Since he had no children of his own, he was succeeded by his younger brother, Baelor.

Baelor I became the ninth king of the Targaryen Dynasty. Although he had wished to become a Septon, his father had forced him to marry his sister Daena. Since he never consummated the marriage, Baelor I had no children. After he died, his uncle Viserys II became the King of the Seven Kingdoms.

Viserys II served as Hand of the King to two of his nephews before taking the Iron Throne. He married Larra Rogare and had three children: Aegon IV, Aemon, and Naerys Targaryen.

After the short reign of King Viserys II, his eldest son, Aegon IV, ascended the throne. He had wed his sister Naerys and only had one trueborn son: Daeron II.  Commonly referred to as Aegon the Unworthy, the monarch legitimized four of his bastard children – including Daemon I Blackfyre and Brynden Rivers, aka the Three-Eyed Crow – on his deathbed.

Following the death of his father, Daeron II ruled Westeros. Though the Blackfyre Rebellion mired his reign, he still succeeded in establishing peace throughout the realm. He married Myriah Martell of Dorne and had four sons: Baelor, Aerys, Rhaegel, and Maekar.

While Daeron was still alive, Maekar accidentally killed Baelor during the Trial of the Seven. Thus, Baelor’s firstborn son Valarr was named the heir to the Iron Throne. However, both Daeron II and Valarr died from sickness, which made Aerys the rightful heir.

During his reign as the king, Aerys I Targaryen appointed his uncle Brynden Rivers as Hand of the King and let him rule in his stead. He was married to Aelinor Penrose but had no children. When he died, his crown went to his younger brother, Maekar. Maekar I had a short but peaceful era as the King of Westeros. He married Dyanna Dayne and had six children: Daeron, Aerion, Aemon, Daella, Aegon V, and Rhae. However, his two eldest sons died in his lifetime.

Moreover, his third-eldest son, the beloved Maestor Aemon of Game of Thrones, refused the Iron Throne and suggested Aegon V should be declared the heir.

You all should remember Maestor, the old man who voted for John Snow at Castle Black.

Aegon V, known as Egg, was the fifteenth king of the Targaryen Dynasty. He sent Brynden to the Night’s Watch after coming into power and was married to Betha Blackwood. He had five children: Duncan, Jaehaerys II, Shaera, Daeron, and Rhaelle.

After Duncan famously abdicated as heir to the Iron Throne to marry Jenny of Oldstones, the throne went to Jaehaerys II.

Jaehaerys II was among the last Targaryen kings to rule Westeros. The War of the Ninepenny Kings also took place during his reign. He took his sister Shaera as his wife and had two children: Aerys II and Rhaella. Known as the Mad King, King Aerys II was the last Targaryen ruler. He had been forced to marry his sister Rhaella, with whom he had several children, though only three lived to see adulthood: Rhaegar, Viserys, and Daenerys.

His firstborn son, Rhaegar, had married Elia Martell and had two children. However, Elia and her children were brutally murdered during the Sack of King’s Landing in the aftermath of Robert’s Rebellion. The rebellion began after Rhaegar allegedly kidnapped Lyanna Stark, the sister of Ned Stark, who had been promised to Robert Baratheon.

Rhaegar Targaryen died at the Battle of the Trident, while his young siblings were exiled to Pentos. Meanwhile, Aerys II was slain by his Kingsguard, Jamie Lannister.

Daenerys was a central character in Game of Thrones. She was initially married off to Khal Drogo at the behest of her brother Viserys, their heir to the Iron Throne.

Viserys wanted to use the Dothraki to attack King’s Landing, but his plans didn’t reach fruition as Drogo murdered Viserys by pouring molten gold on his head. Thus, Daenerys became the last surviving Targaryen with a solid claim to the crown. She was also the first Targaryen to hatch not one but three dragons from their eggs in over a century.

Over the years, she gained a large following in Essos and sailed to Westeros with her own army. She also received support from Tyrion Lannister, Lord Varys, and Jon Snow, among others.

Daenerys managed to get her hand on the Iron Throne after murdering thousands of people and burning down the entire city. However, she was Queen of Westeros only briefly, as Jon Snow murdered her in the throne room.

Though he was raised as a bastard of Ned Stark, Jon Snow was the trueborn son of Rhaegar Targaryen and Lyanna Stark. As it turned out, the two eloped after Rhaegar annulled his marriage to Elia. Lyanna died shortly after childbirth, though she lived long enough to hand her son to her brother.

To protect Jon, aka Aegon VI Targaryen, from the wrath of Robert Baratheon, Ned hid his true identity from everyone. At the end of Game of Thrones, Jon was sent Beyond the Wall as a punishment for killing Daenerys.

Which Episodes of Game of Thrones You Should Watch Before Starting House of the Dragon?

As per HBO, you should watch the following episode of Game of Thrones to refresh your memories:

All of the above-mentioned episodes are streaming for free on HBO Max. If you are outside the US and wondering how you can watch House of Dragon online! get ExpressVPN and watch all these episodes of Game of Thrones now before starting House of the Dragon.

We have created a comprehensive guide to watch House of Dragon in Canada, House of the Dragons in New Zealand and Ireland.