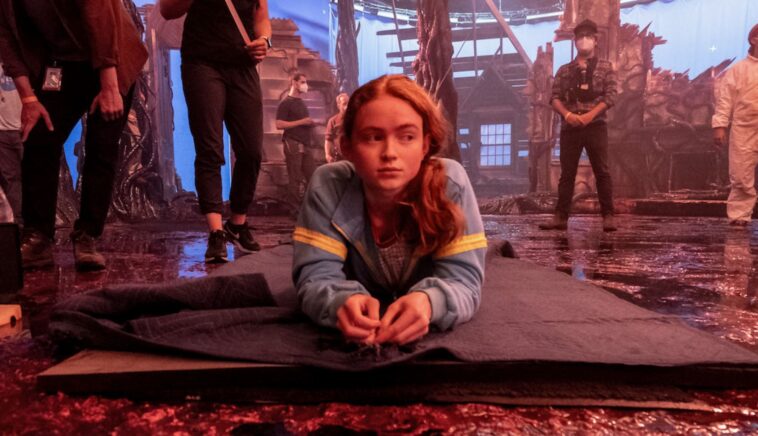 Sadie Sink, an American actress famous for her role in Stranger things as Max Mayfield, has become a rising star after the release of Stranger things season 2 in October 2017. Even so, Sadie also seized every opportunity coming along and proved her versatility and exceptional expertise through every work she got.

Sink has been persistently unique in front of the camera for work as her first lead role as Ziddy in Fear Street 1978, Tailor Swift’s All Too Well, Max Mayfield in Stranger Things, and many more. However, she believes she did an Emmy nomination-worthy performance in Stranger Things 4.

In the meantime, Sink got the spotlight in the podcast show “Collider Ladies Night,” through which she confessed how she enjoys theatre more than films; moreover, she explained her journey with Stranger things along with prior role choices and the impact they would make for her in the industry.

“Film and TV acting, I hadn’t tried that, or I wasn’t interested in it, and it was only the stage and musical theater that I loved. The film and TV part of it came along, I think once I turned 13 or something, and that’s kind of when your Broadway career comes to a temporary halt, and they’re like, ‘Okay, we’ll see you when you’re 18!’ So during that time, I think I auditioned for a few TV shows or movies here and there, and then that’s when I ventured into that side of acting. But yeah, I always wanted to be on the stage, and I still do, but film and TV, I love it a lot.” Sink got sufficient time to explore every structure of art and storytelling but focusing on stranger things at the moment is excellent, as she proved to be a powerhouse like Max. However, it wasn’t easy to steal the moonlight on a well-known show that already had an established cast and crew. Sink admitted that she panicked after enrolling for Stranger things season 2, but her co-actors like Caleb McLaughlin, Gaten Matarazzo, Finn Wolfhard, and Noah Schnapp paved her way.

“I didn’t feel intimidated leading up to that first day, but once I stepped on set, I was like, ‘Oh, wow. It’s going time. We’re really doing this!’ I think seeing how the boys, like Finn and Caleb and Noah and Gaten, just how they handled themselves on set, and how it was really fun and laid back, it kind of reassured me, ‘Okay, yeah. Take a breath. Just relax into it and it’s all gonna work out! We don’t have to work ourselves up too much.’ So just having their playful, fearless energy was very reassuring for me.”

To get into Max’s character, Sink had too much to cope with from the start due to the role’s demand for emotionally and physically challenging situations. Upon asking about her personal experiences with the role, she played beautifully. She replied;

“I think the first moment that comes to mind is when she has the bat with Billy in Season 2. And I remember reading it, and I was like, ‘Oh, okay, Max. Alright. I get you.’ Before she had this relationship with Billy that was really tumultuous and not healthy, and you just kind of saw that back and forth between them and him just ganging up on her. And I remember reading it and being like, ‘Okay, when is she gonna snap? When is she gonna take control?’ And then, in I think, I guess it was the final episode of Season 2, when she finally does. That felt like a defining moment for her just in the sense that she’s not someone that’s gonna be stepped on. She reached her breaking point and she’s gonna act on it and finally speak her mind, so that was very empowering to read and to play out and a nice moment for Max.”

That was an extraordinary knock for Max, but the ending of Stranger things season 4 episode 4 tested Max’s character hard while plunging it simultaneously by making her face her scariest fears and reevaluating her wishes for the future, for this Sink had to remain in the character for weeks due to how the series was planned to be shot.

“It was filmed over the span of like a few weeks and it was scattered too, just because of the multiple storylines that are happening this year. So this one giant continuous scene that has to have these high stakes and energy throughout the entire time is really divided up between multiple days, so I think just kind of keeping that energy and that stamina up and trying to remember, ‘Okay, where am I again? What has just happened? Okay, got it!’ It was a lot to keep up with, but something that I think everyone worked really hard on to just kind of make it all make sense, and in the editing room it came together. But on the day, the running scene at the end, it was not as long as it looked like it was. I think it was just one like 25 yards maybe, and I just did it over and over and over again, and then I think they just clipped it all together or something like that. So it was crazy to watch in the end how it all pieced together.”

Even after almost falling apart with Vecna and Billy’s dedication, Max stood still and refused to give up fighting her fear with her friend’s adorable support and motivational wave towards her.

“It’s really metaphorical if you really just look into it because this is a character who is in so much pain to the point where she’s nearly given up, and Vecna kind of expresses that to her and now she’s literally facing her own demons, like Billy just right there and vocalizing to her all of her innermost thoughts that she’s tried to hide for so long. And so for her, to kind of look death right in the eye after Vecna has put her in such a vulnerable position, and for her to still see her friends showing up for her and fighting for her and telling her to fight and choosing to fight and choosing to literally run towards the light at the end of the tunnel, it’s a really beautiful and simultaneously epic moment. So I think after that happens to Max, there’s just this newfound sense of resilience and bravery. She’s still in danger of course, but she chose to fight, which was a really beautiful thing to see play out.”

Can’t wait to hear more about Sink? You got lucky because there are plenty of facts waiting to get explored, don’t miss out on the Collider Ladies Night podcast linked in this article for an exclusive conversation.