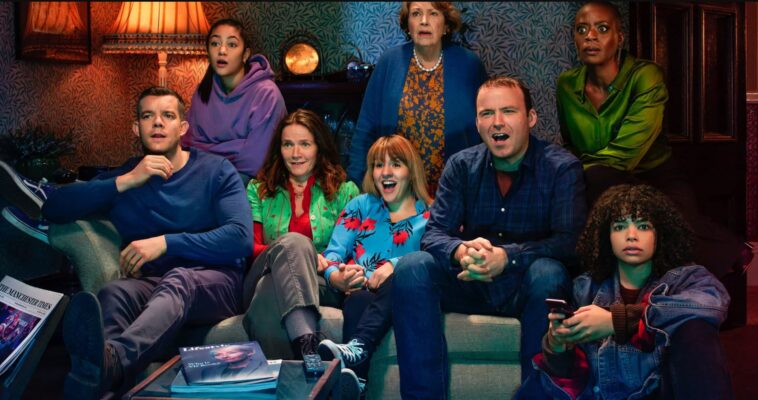 Years and Years is a British dystopian or science fiction drama mini-series released on BBC in 2019. It consists of a single season with six episodes only, with each episode having a runtime of around 1 hour. Lisa Mulcahy and Simon Cellan Jones directed the show.

As confirmed by the creators, there will not be a second season of the show. The show starred Emma Thompson, Russell Tovey, Ruth Madeley, Rory Kinnear, and others in the lead cast.

The story of the six-part series revolves around an ordinary British family based in Manchester, The Lyons. The family consists of Daniel, who is married to Ralph. Rosie is still searching for a new partner. Stephen and Celeste are worried about their kids. Lastly, Edith is always occupied in some humanitarian cause, and the one above all of them is Gran, the imperious Muriel.

The lives of all of them cross into each other on one night in 2019, and then the story jumps into the future. The story progresses by showing the lives of the Lyon family as they gradually advance 15 years in the future.

Britain has been completely changed by several political events, economic disasters, and technological advancements in this era. In each episode, some purposeful event would be shown that would trigger significant changes in the country’s future. The show has a fantastic twist at the end that would leave the viewers stunned and shocked.

In most cases, fictional-drama shows or films do not get much appreciation, but due to its unique and wonderful storyline, the show has an excellent rating of 8.3 out of 10 on IMDb, which denotes its greatness. Similarly, Rotten Tomatoes has a score of 89%, which is also very impressive.

Here is a list of actors and actresses that appeared in the series:

Years and Years is a British drama series, streaming on Netflix. If you want to watch it on Netflix, use a VPN with a Belgium server. We have tested ExpressVPN to watch content that is not available in the US and it worked in unblocking different libraries of Netflix from the US, therefore we highly recommend ExpresVPN to watch your favorite movies and tv shows on Netflix.