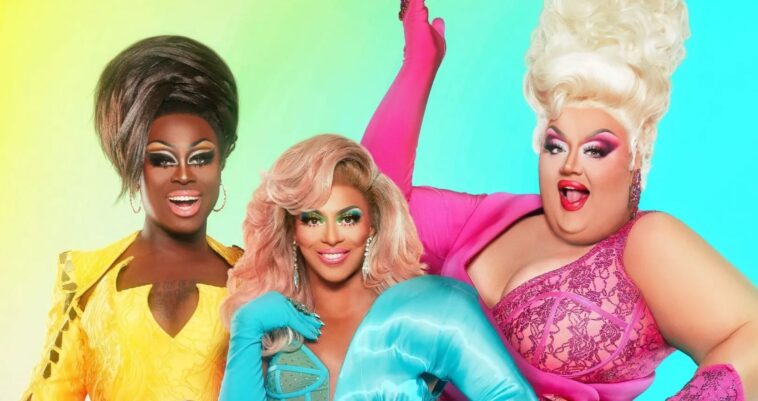 Bringing the excitement and cheerfulness of drag to small towns, We’re Here is an Emmy Award-winning makeover series featuring three of the most famous drag queens to come out of RuPaul’s Drag Race franchise.

Starring Bob the Drag Queen, Eureka O’Hara, and Shangela – all three of whom have made a significant impact in the community, the docuseries juxtaposes the liveliness of drag with heightened discrimination and hatred.

If you are here to find out where to watch We’re Here in Canada, then you have landed on the right page.

Where to watch We’re Here Season 3 in Canada?

We’re Here is heading to HBO Max in the United States, if you are in the US and wish to watch We’re Here then get an HBO Max subscription for $9.99/month and stream the docuseries.

In Canada, HBO Max is not accessible, and there is no announcement from Crave or CTV to stream We’re Here. But that does not mean you can not watch We’re Here in Canada. This guide will enable you to watch the upcoming docuseries from Canada, so read it to the last.

RuPaul’s Drag Race consists of adventures in several states, including Texas, Utah, Florida, etc. If you are looking to get on with their adventure, check out We’re Here on HBO Max. Since HBO Max is not available in Canada, you will need ExpressVPN to change your IP address and stream We’re Here from Canada on HBO. Follow these steps:

The third season of We’re Here is heading to HBO Max in the United States. The series is set to premiere on 25th November in the US and will be available on Sky Go and Now TV in the United Kingdom.

Bob the Drag Queen, Eureka O’Hara, and Shangela are getting on their elephant bus and sashaying to some of the most conservative parts of the United States. Their aim: recruit residents from small towns, give them drag makeovers, and prepare them to bring the house down in one-night-only performances.

Where Are the Queens Headed?

The Backlash from Anti-LGBTQ Protestors

The trio will face an extraordinary backlash in Season 3 of We’re Here. From conservative locals yelling at the queens to calling them hateful names, the upcoming episodes will capture the growing anti-LGBTQ movement in different parts of the country.

In addition, the new season will show a councilwoman in St. George trying to prevent the crew from filming the series in a family park. However, the production went as planned, despite some people’s best efforts to ruin it.

We’re Here’s primary purpose is to spread the message of love and equality joyfully. Hence, this season will feature some heartrending stories of small-town folks as they get ready to put on the best drag performance of their lives.

From giving a makeover to a Pulse nightclub shooting survivor and hearing their story of loss and grieving to celebrating people who had struggled their entire lives to be seen and heard, the new episodes will bring an equal amount of smiles and tears to your face.

Created by Johnnie Ingram and Stephen Warren, the show debuted on April 23, 2020, and has since been renewed twice. Season 3 of We’re Here is heading to HBO Max staring, Bob the Drag Queen, Eureka O’Hara, and Shangela.

Bob, the Drag Queen, is best known for his performance in High Maintenance, Tales of the City, whereas we know Eureka O’Hara is known for his acting in Love, Victor, American Horror Story, etc. We have seen Shangela from the 90s in the most famous show, “X-Files.” She also appeared in the Oscar-nominated movie, “A Star is Born.”

What else can you watch on HBO?

HBO is one of the oldest and most premium content producers in the United States. We have watched Sopranos, The Batman animated series (1992), and House of the Dragon, produced by HBO.

HBO has diversified itself from the beginning in creating content in all forms and formats. In November, we will see the remaining episodes of Batwheels returning to HBO.

The Big Bruch, a cooking competition airing on HBO Max, is a treat for food lovers. The fourth season of Titans has also started streaming on HBO Max, and one of the most anticipated tv series, The Sex Lives of College Girls, season 2, is also scheduled to air this month on HBO Max.

If you are a fan of RuPaul’s Drag Race or love makeover reality television shows, you should check out We’re Here Season 3 this November. Watch We’re Here in Canada on HBO Max with ExpressVPN.

We have tested ExpressVPN to unblock HBO Max in the UK, Canada, and several other countries. Its highly optimized servers in the US worked perfectly fine in unblocking HBO from outside the US. Therefore we highly recommend ExpressVPN to all our readers and subscribers.