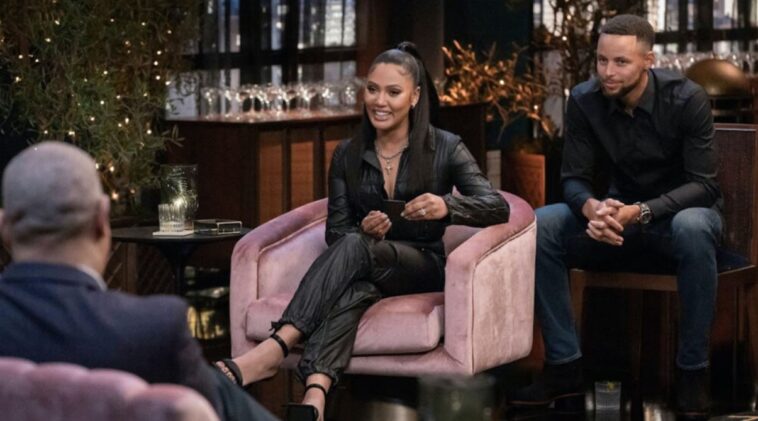 If you are a fan of the 70s or game shows, this blog is going to be like a wish come true. TattleTales, one of the most popular game shows that ran between 1974-1984 and a reboot of “He Said, She Said”, is now getting a reboot of a sort. The new show in question is called About Last Night and is going to air exclusively on HBO Max on February 10, 2022. If you’re not in the US, we still have a few tricks up our sleeves on how you can stream About Last Night in the UK and outside the US on HBO Max.

Of course, it’s been a long time since 1984 so Bert Convy is not going to host the show. However, you would love to know that the beloved basketball player, Stephen Curry is going to be the regular host of the show along with his wife, Ayesha Curry.

For those who want to know about what the show is going to be or if there are going to be any rules involved, the show is going to feature both Mr. and Mrs. Curry having celebrity couples on their show and the hosting duo is going to put forward some hot, burning and sizzling questions that the guest celebs would have to answer. From what we know, there will be three couples on each show and the Currys will be asking each one-half of the couples a question which they would have to guess to test which of the guest couples know their other half better than the other couples on the show.

Due to distribution rights, this show is not airing anywhere in the United Kingdom or outside the US, this is because the show is an HBO Orginal and will broadcast exclusively on HBO Max in the United States.

If you are wondering where you can watch About Last Night in the UK, the answer is on HBO Max by following these steps:

How to get an HBO Max account in the UK or from Outside the US? | Without using an American Payment Method

Due to copyrights and distribution rights, the American streaming giant (HBO) with almost 73.8 million subscribers is restricted to the US, for UK streamers we have BBC iplayer. But the good news is, you can have an HBO Max subscription in the United Kingdom or from any other country, just by following these simple steps:

1- Where to watch About Last Night in the United Kingdom?

About Last Night is an HBO Max Original and exclusively streaming on HBO. You can watch it with a VPN from the UK

3- How many episodes of About Last Night are set to air?

The number of episodes is yet to be decided.

4- Where to watch About Last Night in Canada?

The show released a trailer on 26th January 2022 and as of now and there’s very little information available. At the moment, it is unclear how many episodes the show’s first season will have. There’s, of course, uncertainty about the number of seasons at this point in time as well. What’s known is that the show will air coming Thursday, 10th February 2022 on HBO Max and that Terry Crews is also going to be in one of the episodes.

If you are into game shows with spicy questions then this show is for you. Watch About Last Night in the UK on HBO Max by following the steps mentioned above. You can also watch Rick and Morty season 5, Dune 2021, Peacemaker, and Raised by Wolves on HBO from the UK.