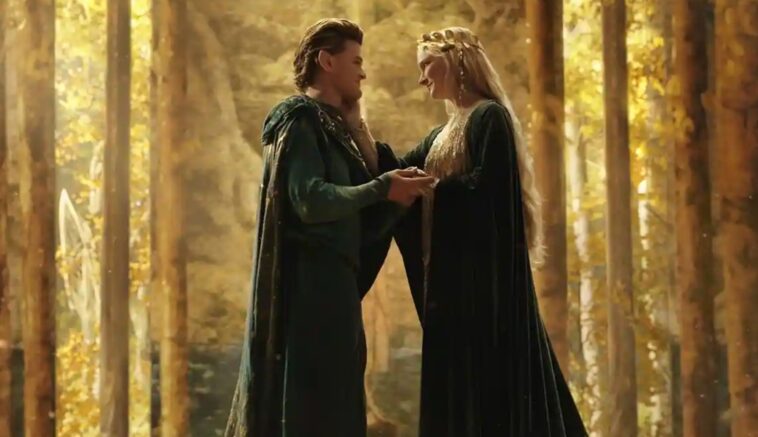 Set thousands of years before the magic of J.R.R Tolkien’s ‘The Lord of the Rings and The Hobbit follows an epic drama with an eclectic cast of characters as they combat the long-feared return of evil to Middle-earth.

The Lord of the Rings: The Rings of Power, which premiered on Amazon Prime Video, bought a lot of grandeur: lavish scenery, sublime crypts, bushels of orcs, and chaotic battles. In addition to the engrossing emotional character arcs, paired with the energetic performances, The Rings of Power offers dizzying production value that truly elevates Middle-earth’s stunning setting.

The Lord of the Rings: The Rings of Power| Release Date

Rings of Power which premiered September 1st is not only good but great; a delightfully captivating and ambitious spectacle filled with stunning visuals and a compelling storyline. Most importantly, it captures that sense of awe we feel when watching the Lord of the Rings movies – one we don’t often experience on the small screen.

September also brings Vampire Academy on Peacock and House of the Dragon on HBO to compete with The Rings of Power.

The Lord of the Rings: The Rings of Power| Plot

The series started with a great job of keeping you up to date with the rising evil, and it feels like it’s about to form a potential sidekick of its own with Galadriel at the helm. Although the title ring didn’t play a role in the show’s early days, it was enough to keep viewers entertained – mysterious characters, political intrigue, dire survival situations, and more.

The series combines what we love about contemporary fantasy, like Game of Thrones and its many protagonists, with the depth and detail of the Tolkien universe. As the rest of the season unfolded, Rings of Power proved to be successful, delivering on its commitment to quality and giving it its all.

The Lord of the Rings: Rings of Power has largely succeeded in staying true to J.R.R. Tolkien’s themes and tone, if not in all the details of his canon. A few disconnected plots and unnecessary detours slowed it down but didn’t derail the story, and when it culminated in the sixth episode, it all came together perfectly. Amazon’s massive budget has produced some of the most dramatic scenes ever broadcast on TV, creating a powerful sequel to Peter Jackson’s beloved Lord of the Rings trilogy.

The Rings of Power| Incredible Performances

The diverse cast of Rings of Power delivered enthralling performances in this series. To begin, Morfydd Clark is absolutely mesmerizing as Galadriel. Clark had some very big shoes to fill after Cate Blanchett won the fans’ hearts with her convincing performance and dedication to the role. But Clark has delivered something much more profound. She has remarkably retained Galadriel’s composure and grace and captured a fierce warrior side unbeknownst to many. Her character immediately captures the audience’s attention, engaging with the plot as a whole.

On the other hand, Elrond, played by Robert Aramayo, was a character I was eager to see evolve and interact with the rest of the characters. Nori, played by Markella Kavenagh, reminded me of Pippin in that she embraces her curious nature with an open heart. Ismael Cruz Cordova introduced a character that piqued my interest: Arondir, a Silvan elf warrior who hides his emotional intensity from the rest of the world. And finally, Owain Arthur played an amusing, lively, and magnificent Prince Durin IV that steals the series’s spotlight and adds humor to it.

The Rings of Power| Picturesque Sets

With its picturesque lands and intricately designed costumes, the show teleports you to Middle-earth and its splendor and glory. With a plethora of new characters and lands, one may feel the show to be a bit dragging. However, the plot keeps you grounded throughout the second age of Middle-earth and keeps you on edge with much detail and suspense.

We personally enjoyed the numerous kingdoms of dwarves and elves introduced in the show. While staying true to the original themes of The Hobbit, Rings of Power has gone above and beyond in bringing the magical world into its full form.

There is a reason the critics are calling it the most expensive show, and the credit goes to Amazon for not holding themselves back from spending on the sets and special effects. A large amount of investment is apparent in every scene of this remarkable show, which successfully impacts the viewers’ experience.

The Rings of Power| Awards & Nominations

The Rings of Power has been nominated for two awards so far, and here is a list of them:

Give it a Shot!

The best part about Rings of Power is that it is far from Tolkein yet so close to the world he has created. In short, the production used the previous trilogy simply as inspiration, not a guide.

You can tell that the show creators have taken their time with each episode as they slowly unraveled the many intricacies of the second age of Middle-earth. It’s safe to say they have taken the liberty to interpret and innovate with the source material and transformed it into something beyond magic.

The show is available on Amazon Prime, which will cost you $14.99 per month or $139 if you go with the yearly subscription plan.