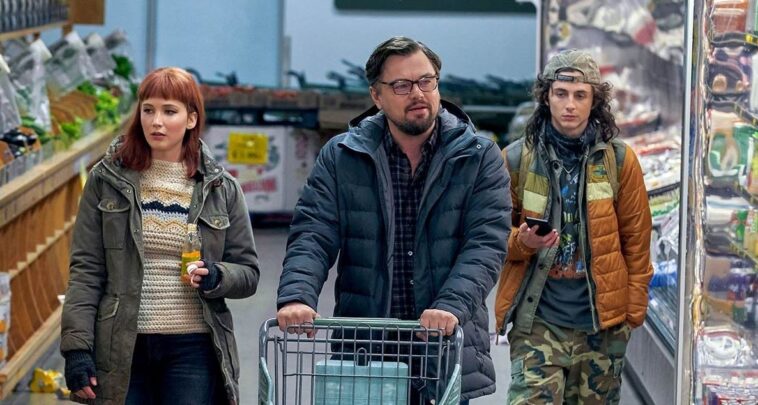 The wait is over and the star-studded dark satire named Don’t Look Up is finally here on Netflix, all over the world. The movie revolves around two astronomers, Leonardo DiCaprio and Jennifer Lawrence, and their media tour where they try to warn the world that a meteor is on a collision course with Earth which may well mean destruction.

The movie is currently showing in theaters and was scheduled to be released on Netflix as well on 24th December 2021.

The movie has a mammoth of a cast. Some of the big shots you get to see in the movie include Meryl Streep, Jonah Hill, Timothee Chalamet, Cate Blancheet, Ron Perlman, Ariana Grande, Tyler Perry, and Mark Rylance. The movie has been directed, written and produced by Adam McKay who has feathers like Anchorman and Vice to his cap.

The movie takes on the ignorant attitude of media, society and social media when it comes to the environmental crisis.

Actress Jennifer Lawrence, who is playing the central role of an astronomer in the movie, has expressed her remarks about the movie with the following words.

“I’ve always wanted to work with Adam McKay, I’m a huge fan. When I read the script, I thought it was genius. It’s maybe the funniest script I’ve ever read, and I thought it was such a poignant way to get such an important point across, that people don’t need to be fighting each other over science. We need to be fighting this collective war to save humanity together.” The 31-year-old actress will also be seen in the upcoming flick Red, White and Water,  where she will be playing a US soldier, struggling to lead a normal life after an injury in Afghanistan. She will be joined by Samira Wiley, Brian Tyree Henry, and Stephen McKinley Henderson. For now, there’s no actual date for the movie’s release but it’s said to complete filming by the fall of 2022.