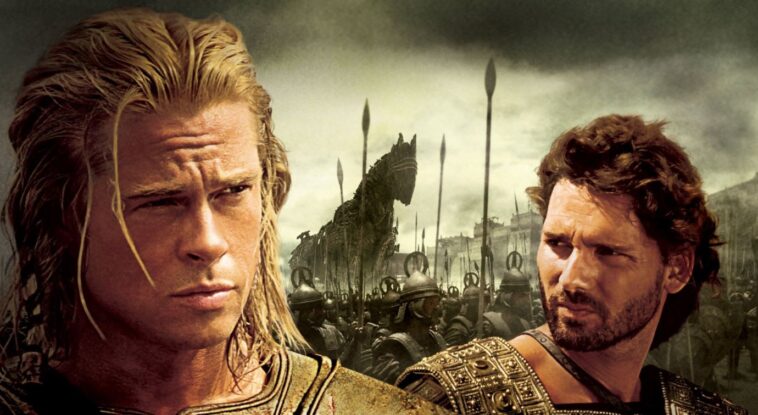 Troy, the movie, is a 2004 epic historical drama based loosely on Homer’s Iliad. Presumed to be true, this movie tells the story of love and war between two kingdoms, Sparta and Troy. While Homer’s poem has existed since 762 A.D. more or less, in 2004, Hollywood finally caught up with the idea and released a movie on this epic war drama.

Shooting for Troy began between April and June 2003 and the movie was finalized and released on May 13, 2004, at Cannes Film Festival. Despite being made and marketed at such a huge scale, the movie was somewhere between mediocre to a success story, especially considering its 185 million budget. If you want to watch Troy on Netflix, read on.

Regardless of its success or lukewarm reception, the movie had some of the top AAA cast members including but not limited to Brad Pitt as Achilles, Eric Bana as Hector, Orlando Bloom as Paris, Diane Kruger as Helen, Brian Cox as Agamemnon, Sean Bean as Odysseus, Brendan Gleeson as Menelaus, Rose Bryne as Briseis, Saffron Burrows as Andromache, Julie Christie as Thetis, and Peter O’Toole as Priam, the King of Troy.

Read more: How to watch Twilight on Netflix from the US

The movie tells Homer’s Iliad in a narrative that follows the events of Trojan prince Paris (Orlando Bloom) falling in love with Helen (played by Diane Kruger), who is already married to Menelaus’, The King of Sparta, and then fleeing to Troy with Paris. However, this enrages Menelaus and King Agamemnon (portrayed by Brian Cox),  Menelaus’ brother, cash on this rage to declare a war on the Kingdom of Troy.

How to Watch Troy on Netflix from the US | Troy Netflix

At the moment Troy can not be watched on American Netflix and that is because the flick was removed from Netflix US due to copyrights and distribution rights. If you want to watch Troy on Netflix from the US, follow these simple steps:

Troy is available to stream on Prime, only if you are residing in the UK. Folks from other countries will get a message “The title is not available in your country”. You can watch Troy online on Prime Video with an active Prime subscription and a VPN. Follow these steps:

The 2004 Brad Pitt movie is available from rent on the following websites.

The movie was made with a budget of USD 175-185 million and it was only managed to gross USD 497.4 million. The critics gave the movie a mixed response with IMDb rating the movie a favorable score of 7.3 while sites like Metacritic and Rotten Tomatoes gave it only 56% and 54% respectively. Even Roger Ebert gave the movie, 2/4 stars.

All the critical reception aside, the movie got nominated for an Oscar for Best Achievement in Costume Design (Bob Ringwood), Awards of the Japanese Academy for Best Foreign Film, Golden Trailer Awards for Best Music and it even won awards like ASCAP Film and Television Music Awards for Top Box Office Films, Irish Films and Television Awards for Best Supporting Actor in Film/TV (Peter O’Toole), and Teen Choice Awards for Choice Movie Actor: Action (Brad Pitt).