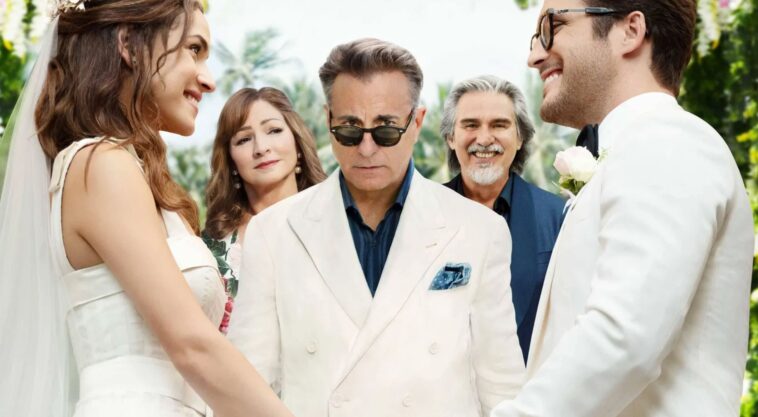 Based on the beloved 1949 novel of the same name, Father of the Bride is the latest adaptation of Edward Streeter’s classic work that has already been revived twice for the cinema. After the original 1950 movie helmed by Elizabeth Taylor and Spencer Tracy was reproduced in 1991 by Nancy Meyers, Father of the Bride is again heading to the theaters with a brand-new cast and a surprising twist.

Written by Matt Lopez and directed by Gaz Alazraki, the upcoming romantic comedy revolves around a father getting ready to walk his daughter down the aisle while barely holding his marriage together. The movie also highlights two prominent Latin cultures without relying entirely on stereotypes.

Father of the Bride tells the story of an American couple and their struggling married relationship. The movie is available on HBO Max in the United States, if you are residing in Canada and want to watch Father of the Bride on HBO then follow these steps:

How to get an HBO Max subscription in Canada | (100% Working)

HBO Max is an American streaming service restricted in the United States and some other countries. If you are in Canada or UK and want to get an HBO Max subscription then follow these steps:

Father of the Bride- Trailer

HBO Max released the official trailer of Father of the Bride on its YouTube channel on May 9, 2022. The clip shows Billy struggling with the realization that his little girl is not only all grown up but is also getting married to her boyfriend, to whom she proposed. The video also shows Billy and Ingrid visiting a marriage counselor before deciding to play the perfect family until Sophie gets married.

Father of the Bride- Plot

Father of the Bride tells the tale of Billy and Ingrid Herrera, a married Cuban-American couple that has to put their relationship problems on the back burner to ensure their daughter Sophie’s wedding ceremony goes off without a hitch. However, there is a clash of personalities as the proud Cuban clan meets Sophie’s soon-to-be-husband, Adan Castillo, who happens to be Mexican.

While Billy has reservations about his daughter marrying a Mexican man, he is also having difficulty dealing with all the family drama in the background.

The 2022 adaptation of Father of the Bride stars Andy García in the role of Billy, while Gloria Estefan plays the character of Ingrid. The ensemble includes Adria Arjona as Sophie, Isabela Merced as Cora, and Diego Boneta as Adan.

Father of the Bride- Release and Reception

Father of the Bride is yet to release on HBO Max. Hence, its ratings are not available as of yet. However, its trailer has been viewed over 7.8 million times on YouTube.

HBO Max is one of the oldest and most prestigious content creators in the streaming business. There are nearly thousands of hours of content available on HBO Max. Here is a list of movies and TV shows you should check out on HBO:

The Father of the Brode is an amazing movie full of culture and drama. If you are into drama and cultural film, you would love to watch Father of the Bride in Canada on HBO Max. Get ExpressVPN to unblock HBO Max from Canada and watch your favorite movies and TV shows, we have tested ExpressVPN with HBO Max from the UK and other streaming services, and it worked perfectly fine. Therefore we highly recommend getting ExpressVPN to unblock geo-restricted content online from anywhere.