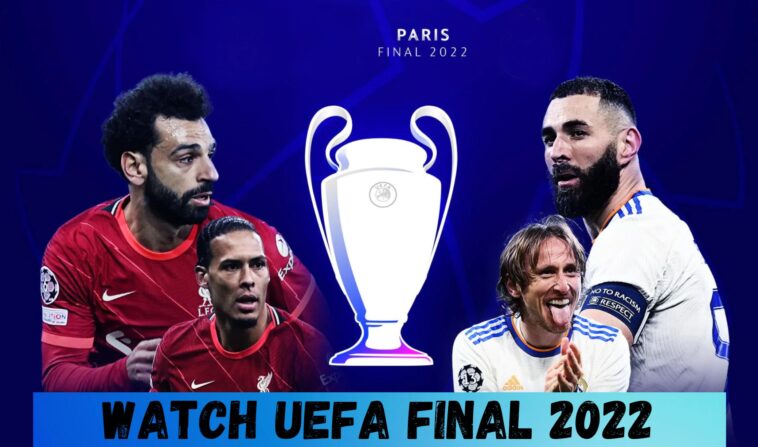 How to watch the Champions League final in 2022? In the internet era, all info about everything can be found, and this article is not an exception. But many people still get confused when it comes to choosing one place where they can find answers to their questions.

Any football fan who enjoys watching football will want to attend the UEFA Champions League final. For some football fans, this means a flurry of anticipation over the next few months as the world’s greatest players battle it out to be crowned champions of Europe. We are going to see the clash of titans, Liverpool vs Real Madrid in the UEFA Champions League final on Saturday, May 28, 2022, at 3:00 PM ET. The final will stream live for free on the BT Sports YouTube channel in the UK.

If you are wondering where to watch Liverpool vs Real Madrid live online for free in the United States or anywhere else then follow these steps:

Liverpool vs. Real Madrid will stream on the YouTube channel of BT Sport but only in the UK. Follow these steps to stream it from anywhere in the world:

You can watch Liverpool vs Real Madrid Live online by downloading ExpressVPN. If you subscribe to its annual plan, you will be able to avail an additional three months of subscription without any cost.

In addition, Express VPN plans come with a 30-day money-back guarantee and allow you to secure up to five devices simultaneously. After connecting to a British IP address, open the BT Sport channel on Youtube or click here. You can now stream Liverpool vs. Real Madrid 2022 Final live online from anywhere globally for free.

Where to watch the Champions League Final 2022 Online | Stream Madrid vs. Liverpool free

Where to watch Liverpool vs. Real Madrid in the United States

Watch Liverpool vs. Real Madrid in the US Paramount Plus holds the right to broadcast the Champions League in the US. The streaming service is available for $5.99. However, you can watch Liverpool vs Real Madrid for free in the US with the Paramount+ 7-day free trial.

Stream the UEFA Champions League Final on CBS/Paramount Plus

The service is available for only 6 USD/month, and you can also avail free trials. You can do this through your TV provider or by signing up directly through CBS/Paramount’s website. Once you’re signed up, you’ll be able to watch all of CBS’s programming from anywhere.

How to watch Liverpool vs. Real Madrid in Australia

If you are residing in Australia then you are in luck, because the Australian streaming service Stan has the rights for coverage of the Champions League 2022, Europa League, and Europa Conference League.

Stan is available for AU$10 (Basic Package) with the Stan Sports add-on at AU$10. The total dent in your pocket will be AU$20 if you choose to watch Liverpool vs Real Madrid Stan.

But we are here to save you from the costly sports packages and let you stream the Champions League Final 2022 for free.

You don’t have to sign-up for Stan because Liverpool vs Real Madrid will also stream live on 9Now in Australia.

All you need to do is sign-up for 9Now and you are all set to stream Liverpool vs Real Madrid final for free from Australia or anywhere else in the world (with a VPN).

Where to watch UEFA 2022 Final in Canada

In Canada, you can stream Liverpool vs Real Madrid 2022 on DANZ for $20 (CAD). DANZ has the official broadcasting rights for Champions League, Europa League, and Premier League. DAZN is a fantastic sports streaming service that offers access to some of the best-televised sporting events in the world. You can watch live matches from popular leagues like Major League Baseball, La Liga, Serie A, Bundesliga, Ligue 1, and more with your subscription

And now you can watch all of the action from this year’s UEFA Champions League Final—which includes Real Madrid vs. Liverpool—on Fox Sports 1 or Sky Sports 1! You can get the subscription for only 20 CAD/month or 150 CAD/year.

Get started today by signing up for DAZN and setting up auto-renewal so you don’t miss another minute of your favorite teams’ games!

Note: Subscribe to DAZN Canada via PayPal if you do not have a Canadian credit/debit card or postal code (e.g., G1X 2W1, V9N 9C5).

Where to watch Liverpool vs Real Madrid in the UK You can watch it on TV using the BT Sport app, available for iOS and Android devices and some smart TVs.

The BT Sport app also works with Chromecast devices, so you can use your phone or laptop to control what you’re watching on your TV.

If you don’t have a TV or want to watch the game somewhere else in your house, you can stream it on your computer or tablet via the BT Sport website. You’ll need to sign up for a free trial with either Apple or Google to access this option (the trial lasts seven days).

If you’re a fan of European football, you’ll want to keep an eye on RTÉ this weekend. The broadcaster is airing all the UEFA Champions League finals in 2022 for free, and all you have to do is tune in!

2. Choose your device type (desktop or mobile). Once there, click “Live TV” on the top right-hand corner of your screen. A list of available channels will appear; choose “RTÉ One HD.” If there isn’t a live stream available for that channel yet, it will automatically begin playing when it becomes available!

Note: Streaming information is available here, but please remember that not all games will be broadcast.

How to watch Liverpool vs Real Madrid 2022 on Smartphones

If you’re looking to watch the Champions League final for free, you’re in luck! ServusTV is a free service that will let you stream the game in HD on your phone, tablet, or computer. You can sign up for an account here and then use it to start watching the game from wherever you are.

If you’re a soccer fan and want more content from ServusTV, consider getting a subscription. There are three levels: Silver, Gold, and Platinum. Each offers more access to matches and other content than the previous level.

Note: Streaming information is available here, but please remember that not all games will be broadcast.

There’s no better resource than YouTube if you want to watch the 2022 Champions League Final highlights. Just search “Champions League,” and you’ll find plenty of channels dedicated to posting highlights from all of the matches in the tournament.

You can also use the site’s advanced search features to narrow down your results by team or player.

The winner of the 2022 Champions League final will be?

On May 28, Liverpool and Real Madrid will face off in the Champions League final at the Stade de France, Paris.

Will Liverpool lift the trophy this time?

“We think it is revenge time,” Salah has spoken about facing Madrid in an interview. He is determined to win. There are many ways to do it. He has yet to sign a new deal with Liverpool, so this may be his last final with the club.

For Liverpool, it was their sixth appearance in a European Cup final, their first since 2007 when they lost to AC Milan, and their first loss since losing out to Chelsea in 2005.

Will Real Madrid grab it the 14th time?

Real Madrid has won more European Cups than any other team (13 times in total) and has also lifted the trophy four times in the last five years. They have also made it to three consecutive finals in this competition since 2016, though they lost on both occasions before winning back-to-back titles.

Real Madrid is always unpredictable in this event, as seen in their semi-final against Manchester City. The way Real Madrid came back in the last few minutes was beyond anyone’s imagination. It is the current champion of La Liga, and it has the best center forward in the world ( Karim Mustafa Benzema). There is a high expectation that Karim will win this year’s Ballon d’Or.

Will this be the first time Real Madrid and Liverpool face each other in the UEFA Champions League?

Madrid’s last eight meetings with Liverpool have won four, drawn one, and lost three. Their goal difference against Liverpool is 10-8. Additionally, Real has won all five of their recent meetings with the Reds, who won the first three meetings. Liverpool and Real Madrid have also met twice in European soccer’s biggest games.

There is no excuse for missing the next Champions League final in 2022, as there will be numerous opportunities to catch the action on TV. You can live stream the tournament online with a cable streaming service, but many fans will opt to tune into an over-the-air broadcast on their local network.

This is all the information you may need for your Champions League final in 2022. However, suppose you’re ever unsatisfied with your sports television streaming options. In that case, you are recommended to look at other available options within your market and examine how they suit your needs best.