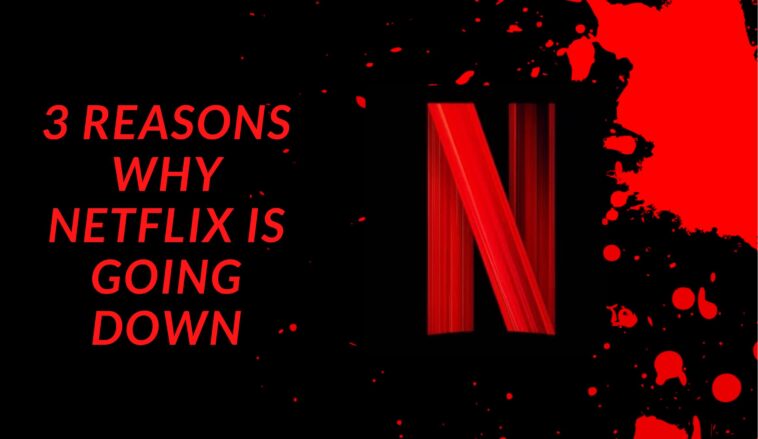 Netflix has had a rough few weeks.
The streaming giant that turned the entire entertainment industry on its head with binge-worthy original content found its journey towards success coming to an abrupt halt in April 2022. The company announced that it had lost subscribers for the first time in 10 years.

As it turned out, nearly 200,000 consumers left Netflix in the first fiscal quarter, with another two million projected to unsubscribe in the coming months.

The news of the massive exodus caused panic among investors, prompting them to flee before things took a turn for the worse. Some even resorted to filing lawsuits. As a result, Netflix saw its stock plummeting more than 35%, forcing it to shed $54.4 billion off its market cap overnight.

Over the next few days, the stock price fell even further.
So, where did it all go wrong? Could this be the beginning of the end for Netflix? Keep reading to find the answer to all your questions and more.

How Did It All Begin— The Netflix Story

Netflix has a rather interesting origin story. The company was founded in 1997 by Reed Hastings and Marc Randolph. They put their entrepreneurial spirit and skills in computer science to establish a fast-growing business inspired by the business model adopted by Amazon.

As the story goes, Reed got the idea of shipping DVDs over the internet after Blockbuster charged him $40 for turning in a VHS tape late. The venture was widely successful, prompting Netflix executives to approach Blockbuster with a $50 million offer in 2000. Interestingly, the Blockbuster team laughed at them and showed them the way out.

While the famous VHS-lending company shut down in the later years, Netflix continued to grow. After running successfully for nearly a decade, the company changed its business model to stream content online – and the rest is history.

Netflix’s Time in the Sun— The Rise Soon after it pivoted to online streaming, things took off for Netflix. By 2010, it had transformed into the most prominent online platform featuring a wide selection of TV shows and movies.

The presence of quality content on Netflix made hundreds of thousands of households ditch their $50 per month cable TV service for an $8 subscription to the revolutionary streaming site.

Netflix became a roaring success and was soon launched in other parts of the world, starting from Canada and Latin America to the United Kingdom and eventually to Asia. Interestingly, the company saw another significant boost in its profits during the first year of the COVID-19 pandemic.

As the global restrictions on movement came into effect and most parts of the world went into a lockdown, those confined in their homes had nowhere else to turn to except Netflix.

With their daily lives coming to a standstill and work from home becoming the new normal, people now have more time to binge the TV series, movies, and documentaries on the online platform.

During 2020 and the first half of 2021, Netflix gained a large number of subscribers. However, with the vaccines rolling out and people returning to their old lives, the company found itself in a bit of a pickle.

How It All Began to Crumble— What went wrong?

Netflix’s growth has slowed down exponentially over the last six months. Following the Q1 loss of 200,000 subscribers, the company saw its shares plummeting rapidly. The Netflix Inc. shares have shed nearly 68% of their value this year alone as of writing this.

The slow revenue growth started a chain of events that have made the situation even worse for the streaming giant. The first victims of Netflix’s cost-cutting were the staff Tudum – a fan-service website created by Netflix just a few months earlier. In April 2022, the company laid off around 25 employees and contractors shortly after hiring them.

Things took a turn for the worse in May 2022, when Netflix Inc. laid off 150 full-time employees and 70 part-time and contract workers (source: Varity.com) in its animation studio to rein in the costs. Most of these employees were based in the US. The freelance roles in the social media and publishing departments have also been cut.

Reasons Behind the Downfall— Why is Netflix going down?

So, what prompted thousands of users to cancel their Netflix subscriptions in the past year?

While many conspiracy theories are currently brewing on the internet, here are a few genuine reasons that may have contributed to the downfall of the fastest-growing streaming platform.

People have spent more than a year sitting on their couches and browsing through the entire library on Netflix, so it makes perfect sense that many are migrating to other streaming platforms offering a different selection of content.

Moreover, many of the TV shows produced by Netflix in recent years have not been able to gain much traction, forcing the company to cancel them to save costs. Although shows like Stranger Things, Money Heist Season 5, and All of Us Are Dead became instant hits, the abrupt cancellation of the other original content left a bad taste in fans’ mouths.

Let’s admit it – Netflix is not cheap. It has become rather costly over time. In 2014, a standard Netflix account cost around $9.99 per month. However, it’s $15.49 now. In addition, the HDR+ 4K plan offered by the company is currently the most expensive service in the market, costing $19.99.

Comparatively, Disney+ costs $7.99 a month, significantly cheaper than Netflix. Consumers also can bundle their Disney+ subscription with Hulu and ESPN+ for a meager $13.99 a month. Even HBO Max costs a dollar less than Netflix.

Considering both Disney+ and HBO Max are Netflix’s biggest competitors, these numbers say a lot about the shifting customer loyalty.

Here is a breakdown of the least expensive packages offered by top streaming services in the US.

It is no secret that the rapid increase in inflation has forced many households to cut down on unnecessary expenses. Unfortunately for Netflix, many chose to ax entertainment streaming services.

3- The Consumer—Password Sharing and Competition

After the news of Netflix losing subscribers began to make headlines, Hastings started blaming its competitors as well as illegal password sharing for the drop in revenue. According to the company, more than 100 million+ households are currently using the service without paying for it.

In a bid to solve this problem, Netflix announced a crackdown on the infringing profiles. While the results are yet to be seen, the measure to block password sharing has likely irked off many subscribers as well. The platform is also trying to right the ship by rolling out a cheaper ad-supported plan over the next two years.

Conclusion: Is It The End for Netflix?

Netflix has been at the top of the VOD industry for a very long time, so it may eventually bounce back from this setback. However, back when Netflix started gaining popularity, it had no big competitors. Today, the market is saturated with big-name companies that have either launched or are planning to launch their streaming websites.

The high-quality original content present on Disney+ and HBO Max, combined with the low prices of Hulu and Amazon Prime, have made the streaming wars even more fierce. With many studios canceling their licensing, investors suing the company, and massive layoffs, Netflix is bound to face a tough time in the coming months.

So, to conclude, it may not be the end of the road for Netflix, as it still has its own content library to fall back on. Furthermore, the company has licensing deals with many international studios. The recent influx of Korean, Spanish, and Scandinavian content on the streaming platform may just as well carry it through this impediment.