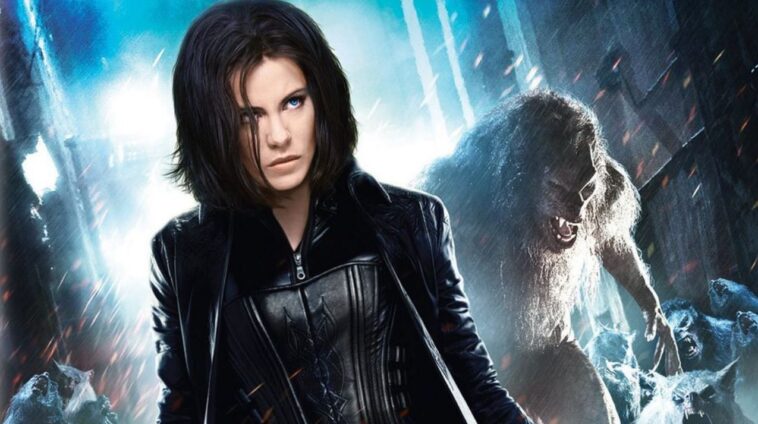 Underworld is a series of five movies and three animated shorts as well as a video game depicting a war between the wolves (called lycans in the series) and vampires and shows the struggles of those caught between the war of these two factions. Witness all the action now because Underworld is streaming on Prime videos.

The main series has been created by Len Wiseman and Kevin Grevioux along with Danny McBride and is divided into five parts namely Underworld, Underworld: Evolution, Underworld: Rise of the Lycans, Underworld: Awakening, and Underworld: Blood Wars.

The main series follows the struggle of a Death Dealer –  a woman named Selene who has sworn to avenge the death of her family at the hands of Lycans. It’s only during her struggle to find out more about the lycans that she runs into a guy named Michael, who is considered a key for the lycans and their total domination. As Selene, digs deeper, she finds more about Michael, the lycans, vampires, and someone who is like a father to her, Viktor.

The second part is where Selene takes Michael to a safe house as she tries to wake up Markus, a vampire, the very first of his kind. Nevertheless, things don’t happen as planned and Selene finds herself battling Markus as she tries to stop Markus from achieving his own agenda.

The third part is rather a prequel focused on Viktor and other characters and doesn’t involve Selene as the main protagonist. This installment tells the origin story of the war. It’s about love between a lycan and a vampire and how that started a war between the two clans.

The fourth installment takes us back, or rather forward, to the present and once again, narrates the story of Selene, how she escapes, learns of a daughter she has, and how she deals with the world torn apart between the lycans and the vampires that have finally decided to retaliate.

In the fifth part, Selene is now being hunted by both the lycans and the vampires and not only does she have to survive, but she also has to put a stop to the centuries-old war between the two species.

Read more: How to Watch Underworld [ALL PARTS] on Netflix

Where else can I watch Underworld movies online?

Read more: Where can I watch 1883 without cable for FREE

Underworld movies are available for rent on the following platforms:

you are now fully equipped to stream Underworld movies on Prime Video from the US or anywhere in the world. You can watch it on Netflix or Fubo TV if you don’t have an active Prime subscription. Renting the movie on different platforms like Apple TV, Amazon Videos or Google Play Movies is another viable option for you.